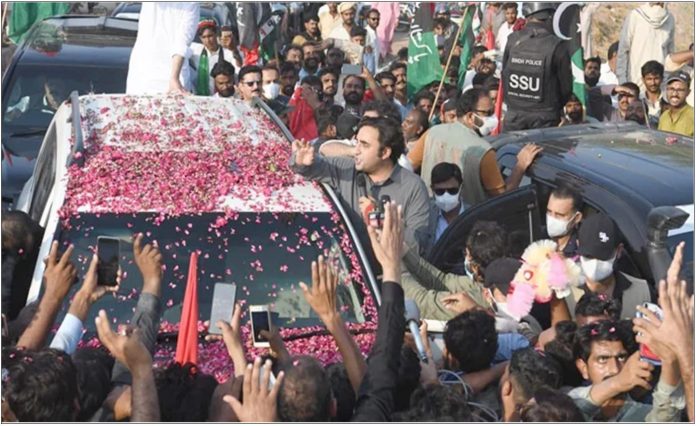 MULTAN: PPP Chairman Bilawal Bhutto Zardari on Tuesday said whenever PML-N President Shahbaz Sharif makes a statement, party members distance themselves to say it was his “personal decision”.The PPP chairman took a jibe at the PML-N as he addressed his party workers during a rally in Multan. “Shahbaz Sharif is the party president, his decision should be final,” he remarked. Bilawal further claimed: “If Pakistan Democratic Movement (PDM) had stayed [united], it could hold a long march, and before reaching Lahore, they could have made [Chief Minister Punjab] Usman Buzdar resign, and [Prime Minister] Imran Khan would have resigned before the march reached Islamabad.” “Shahbaz Sharif was aware of all the formulas,” the PPP chairman said, lamenting over the split of the Opposition alliance. Bilawal stressed PDM would not be able to make headway if the leadership remained confused and claimed as soon as the Opposition is ready, PPP would move a no-confidence motion in the parliament. “The PDM leadership started talking about our resignations instead of the Punjab chief minister and the prime minister’s resignations,” Bilawal said, adding that his party had sincerely wanted to oust the government through PDM. Taunting the government over its electoral reforms, Bilawal said the Centre was proposing to roll out electronic voting machines when there is persistent loadshedding in the country. “Electronic voting machines are a controversial matter, we will need to deliberate further over this matter,” Bilawal said. Last month, PDM held its first major rally without PPP, which had parted ways with the alliance. Fazlur Rehman, on August 28, had said that PPP “stabbed PDM in the back”, and has now become “a thing of the past”.Bilawal, a day after Fazl’s comments, in what appeared to be a response to the remarks, had said that PPP had been “cheated” by trusted friends, and will now only rely on its jiyalas (loyalists). He said the party will stand on its own feet and do its own politics.