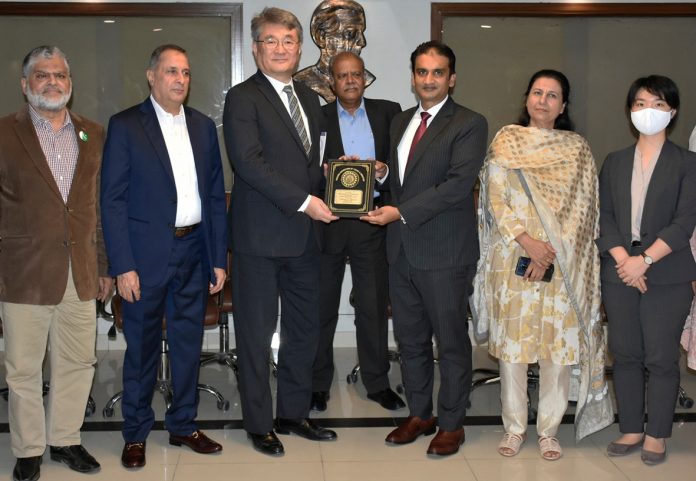 KARACHI: Japanese Consul General in Karachi Isomura Toshikazu has said that we will take all possible steps to increase bilateral trade between Pakistan and Japan, Pakistani products should be promoted in the Japanese market.
He expressed these views during a visit to the Korangi Association of Trade and Industry (KATI). KATI President Saleem-uz-Zaman, Senior Vice President Zaki Sharif, Vice President Nighat Awan, Committee on Diplomatic Affairs Chairman Rashid Siddiqui, Former President Masood Naqi, Ehteshamuddin, Farrukh Mazhar, Johar Qandhari and Okamoto Yu, Economic Adviser to the Japanese Consul General were also present on the occasion.
The Japanese Consul General said that the Japanese company JETRO determines the investment in Pakistan, if Pakistani industrialists send proposals they will be provided with all possible facilities and guidance. He said that there is a plan to hold exhibitions in Japan all the year round. If Pakistani investors and industrialists take interest, I will personally recommend them to Japanese companies to provide all possible cooperation. The two countries will exchange trade delegations once COVID-19 situation improves and travel restrictions are lifted.
Japan is importing basmati rice and soap from Pakistan. Consul General Isomura Toshikazu added that if exporters from Pakistan contact me for promotion of other products including fish, I will personally help them.
“I always tell Japanese companies that Pakistan and Afghanistan are huge markets with a total population of 250 million, they should concentrate on them,” he said.
Earlier, KATI President Saleem-uz-Zaman welcomed the Japanese Consul General to KATI for his third visit and said that trade volume with Japan is very low and joint efforts should be taken to increase it. He said that fortunately Japan and Pakistan were not much affected by COVID-19. President KATI said that 85 Japanese companies are operating in Pakistan. He said we are not interested in any aid or financial assistance from Japan but we are interested in exchanging technology and vocational training from Japan.
Rashid Siddiqui, Chairman, Committee on Diplomatic Affairs, said that separate single country exhibitions should be organized in Pakistan and Japan so that investors of both the countries could take advantage of the opportunities available in joint trade. Former President Masood Naqi also expressed his views at the event while Vice President Nighat Awan gave vote of thanks to the dignitaries.