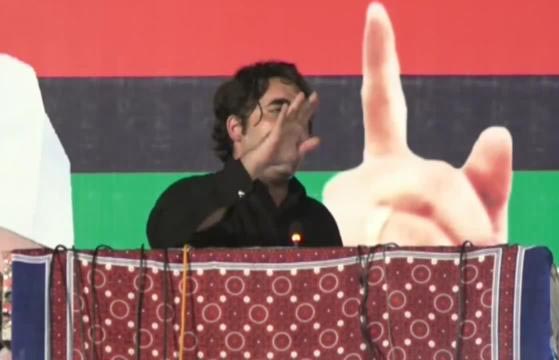 MAILSI: PPP Chairman Bilawal Bhutto Zardari on Monday, while addressing workers’ convention in Mailsi, said he hopes that a jiyala (PPP loyalist) will get elected as the prime minister of the country as well as the chief minister of Punjab.

“Our promise is the promise of Garhi Khuda Bakhsh,” he added, referring to his political ancestry.

The PPP chairman said that the party will expand the Benazir Income Support Programme if the public elects the PPP to form the new government.

“Our first responsibility will be the provision of employment opportunities to people if we are given a chance,” said Bilawal, adding that his party will fight against unemployment in courts and parliaments.

The PPP Chairman said that Prime Minister Imran Khan turned out to be “an employment thief besides being a sugar, wheat, and oil thief.”

“Imran Khan plundered the stomachs and pockets of the people but we will take account of it,” said Bilawal.

Taking a further jibe at PM Imran Khan, he said that former president Asif Ali Zardari forced Musharraf to run away and now “we will make this ineligible premier run away too.”

“PM Imran Khan had promised 10 million jobs but I ask how many people got employed,” questioned Bilawal.

He said that Pakistan is facing record poverty and unemployment for the last three years.

Comparing the federal government with the PPP led-government in Sindh, Bilawal said that the PPP increased the pensions up to 100% and salaries up to 120%.

He said that Mailsi’s public, by welcoming PPP, proved that Punjab’s Bhutto is still alive.

“You have made history by supporting Zulfiqar Ali Bhutto, Shaheed Benazir Bhutto, and Asif Ali Zardari, but I am here to ask for your help,” said Bilawal.

“Support us and together we will change the fate of Punjab and Pakistan,” he said.