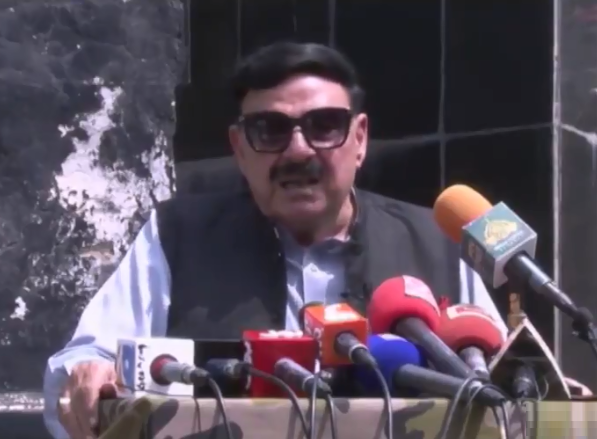 ISLAMABAD:Minister for Interior, Sheikh Rashid Ahmad on Sunday said ‘hue and cry’ of India on the prevailing regional situation was a natural outcome as it faced a shameful defeat with humiliation and disgrace in Afghanistan, witnessed by the whole world.

Talking to media persons at the Torkham border, the minister said the whole world was well aware of India’s such bemoaning condition as it invested billions of dollars in establishing Afghanistan’s National Directorate of Security (NDS) and 60 training camps in Afghanistan in the last 40 years.

He said the Indian intelligence agency, Research and Analysis Wing (RAW), and Afghanistan’s National Directorate of Security (NDS) were also in a state of stress on
facing such defeat in fulfillment of their nefarious designs.

Sheikh said, “Their demoralized faces at the time of evacuation from Afghanistan were ample proof of their downfall, which was captured by the media also.” He added the whole world was giggling at the defeat of NDS from its own Afghan people.

He dispelled this impression being presented by India that a large number of people were present at the Torkham border and that there were Afghan refugee camps. He made it clear that there was no such camp.

He said Pakistan had completed the safe evacuation of 10,000 persons from Afghanistan, adding that 21-day transit visa was being given on arrival.

He said Pakistan was supporting the foreigners’ evacuation after the takeover of the Taliban in Afghanistan on humanitarian grounds.

Sheikh Rashid said, “Our responsibility was just to assist them and reach their border safely.” He said there was no burden of Afghan refugees on Pakistan.

The minister said no one was expecting this breakthrough and taking over of the Taliban in the shortest time. “Now Taliban had to play a responsible role and fulfil its commitments with the international world.”

He thanked Allah Almighty that there was no report of any massacre or bloodshed in Afghanistan as Afghanis were handling their country’s matters impeccably and resolving their outstanding issues with mutual consensus.

He repeated the commitment of Prime Minister Imran Khan that Pakistan would not allow using its land against Afghanistan and added that the Afghan Taliban had also promised that Tehreek-i-Taliban Pakistan (TTP) would not be given permission to operate against Pakistan.

He also predicted formation of a new bloc in the region and the future important role of Pakistan, China, Iran, and Russia in ensuring lasting peace in the region. He added this region was now getting safe from the pressure of those who were very far from this region.

Congratulating the nation in advance on Defence Day on September 6, the minister said the Pakistan Army was proficiently accomplishing its responsibility to safeguard the country and performing duties on borders to protect every inch of the motherland.

He said Pakistan’s security agencies were vigilant to respond to any threat from enemies. Pakistan Army was deployed at the borders, he said adding that forces were monitoring movement along the divide.

The minister said the whole nation should be proud of having such professional security agencies and their sincere contribution to the country.

“We had sacrificed more than any country of the world with loss of 80,000 lives and over 100,000 who sustained injuries but still our morals were high with having the world’s most professional and sound army,” he added.

Sheikh Rashid said, “We expect great respect and honour from the international world on these sacrifices just for maintaining peace and stability for the entire world. We are the major contributor to maintaining peace in the region.”

While appreciating the arrangements made for facilitating those coming from Afghanistan he said, the best arrangements had been made by Pakistan Army, NADRA, FIA and FC at the Torkham border.

He said the government had decided to double the FIA and NADRA immigration staff at the Torkham border. “I will also visit the Chaman border to examine arrangements there and all basic facilities will also be provided.”

Rashid said instructions had been issued to increase other related services at the Torkham border besides the expansion of roads.

He condemned the Mastung suicide attack of a motorbike on FC personnel that claimed three lives and injured 20 others. He said the investigating agencies were tracing the actual culprits behind this incident and added that so far involvement of Daesh, TTP or BLA was not clear.

He said opposition parties had no vision to understand the changing political situation in the region and advised their leadership to observe their changes.