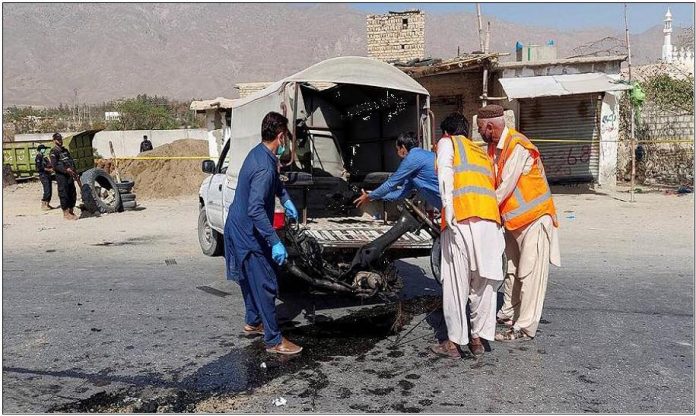 QUETTA: Four security personnel were martyred and 19 people were injured Sunday morning when a suicide bomb blast took place at an FC checkpost located at Mastung Road.   The Balochistan Counter-Terrorism Department (CTD) confirmed the suicide attack had targeted the Sohana Khan FC checkpost at Mastung Road.  Prime Minister Imran Khan, in a tweet, condemned the Tehreek-e-Taliban Pakistan (TTP) for the suicide attack.  The outlawed group took responsibility for the blast, “My condolences go to the families of the martyrs and prayers for the recovery of the injured. Salute our security forces and their sacrifices to keep us safe by thwarting foreign-backed terrorists’ designs,” he tweeted.  Federal Human Rights Minister Shireen Mazari also held the outlawed group responsible, condemning the attack in strong words.  Balochistan CTD spokesperson said that the CTD team had arrived at the spot and had started a probe into the incident.  Police, law enforcement agencies and rescue officials had soon arrived at the area after the blast. The injured were shifted to the Sheikh Zaid hospital, confirmed police.  Police said the suicide bomber had rammed his motorcycle into the vehicle of a law enforcement agency at the checkpost.  Shortly after the blast, a bomb disposal unit had arrived at the scene to conduct an investigation into the attack.