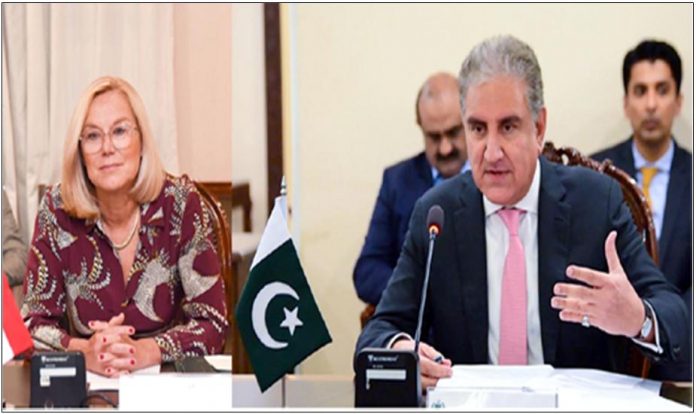 ISLAMABAD: Netherlands Foreign Minister Ms Sigrid Kaag has arrived in Pakistan and visited the Ministry of Foreign Affairs. Foreign Minister Shah Mehmood Qureshi has welcomed his Dutch counterpart upon her arrival at the Ministry of Foreign Affairs. During her visit to Pakistan, Dutch FM Sigrid Kaag will hold delegation-level talks with Pakistani high-ups. Both sides will exchange views on the bilateral relations and evolving situation in Afghanistan. After holding the talks, the foreign ministers of both countries will address a joint press conference. According to Radio Pakistan, Pakistan and Netherlands have been in close contact in the backdrop of recent developments in Afghanistan. Pakistan has extended full facilitation to the Netherlands in its efforts for the evacuation of diplomatic and other personnel from Afghanistan. In a statement, the Foreign Office spokesperson said Pakistan and the Netherlands enjoy close and cordial relations. The Netherlands is one of the largest trading partners of Pakistan in the European Union. A number of Dutch companies have been investing in Pakistan. The spokesperson said the visit of FM Kaag will add to the current momentum of high-level exchanges and help further strengthen bilateral cooperation in diverse fields.