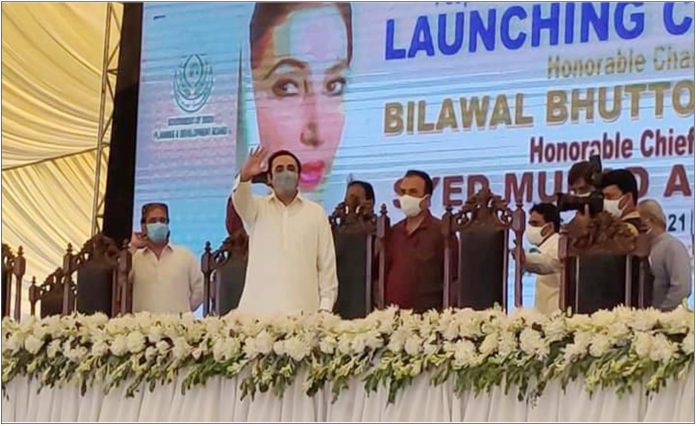 KARACHI: Pakistan People’s Party (PPP) Chairman Bilawal Bhutto Zardari Wednesday said Prime Minister Imran Khan had not given anything new but imitating his party in welfare projects for the masses. He was addressing a ceremony of the Sindh Rural Support Organization (SRSO) in Ghotki Sports Complex. Bilawal said PPP believed in public service and he himself wanted to serve the people without any discrimination. The PPP chairman said they were being taunted by rivals to make voters baggers in the name of the Benazir Income Support Program (BISP) but factually the whole world appreciated it. He said former premier Nawaz Sharif for placing his picture on the card of the BISP and now Imran Khan had removed Benazir Bhutto Shaheed’s name from this program and renamed it as “Ehsaas Program”. Bilawal said people were drowning in the tsunami of inflation but rulers had no feeling for it. He announced that he would run the BISP properly after coming in power. Separately, in connection with the BISP, Bilawal also tweeted that around 1.3 million families in 15 districts of Sindh had benefited from the PPP’s poverty reduction program. He expressed a dream of Pakistan as a country where women play an equal economic, political and social role.