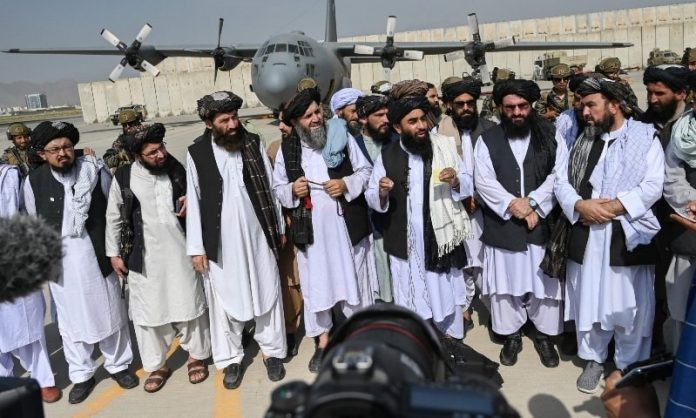 KABUL: The Taliban celebrated their total return to power on Tuesday with gunfire and diplomacy, after the last US troops flew out of Afghanistan to end two decades of war. The United States’ longest military conflict drew to a close on Monday night when its forces abandoned Kabul’s airport, where it had overseen a frenzied airlift that saw more than 123,000 people flee life under the Taliban. Taliban fighters then quickly swept into the airport and fired weapons into the sky across the city in jubilation — an astonishing return after US forces invaded in 2001 and toppled them for supporting Al-Qaeda. “Congratulations to Afghanistan… this victory belongs to us all,” Taliban spokesman Zabihullah Mujahid told reporters hours later on the runway of the airport. Mujahid said the Taliban’s victory was a “lesson for other invaders”.Many Afghans are terrified of a repeat of the Taliban’s initial rule from 1996-2001, which was infamous for their treatment of girls and women, as well as a brutal justice system. However the Taliban have repeatedly promised a more tolerant and open brand of rule compared with their first stint in power, and Mujahid continued that theme. “We want to have good relations with the US and the world. We welcome good diplomatic relations with them all,” he said. Mujahid also insisted Taliban security forces would “be gentle and nice”.The withdrawal came just before the August 31 deadline set by President Joe Biden to end the war — one that claimed the lives of more than tens of thousands of Afghans and over 2,400 American service members. The slightly early finish followed a threat from the regional offshoot of Daesh, rivals of the Taliban, to attack the US forces at the airport. Thirteen US troops were among more than 100 people killed when a Daesh suicide bomber late last week attacked the perimeter of the airport, where desperate Afghans had massed in the hope of getting on board an evacuation flight. The US-led airlift began as the Taliban completed an astonishing rout of government forces around the country and reached the capital on August 14. Their victory came after Biden withdrew nearly all American troops, then was forced to send back about 6,000 more to conduct the airlift. Biden said he would address the nation on Tuesday in Washington, as his critics continued to savage him for his handling of the withdrawal. “We can’t fight endless wars, but the scope & consequence of Biden’s failure here is staggering,” Republican Senator Rick Scott said. Biden’s top diplomat, Secretary of State Antony Blinken, was able to offer little more than stern words for the Taliban. “Any legitimacy and any support will have to be earned,” Blinken said, as he announced the United States had suspended its diplomatic presence in Kabul and shifted its operations to Qatar.