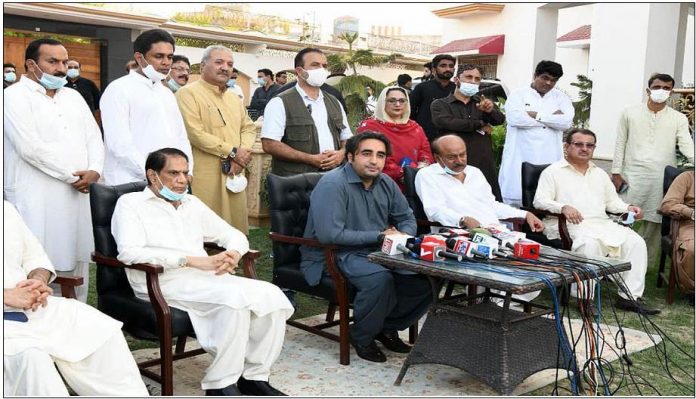 KARACHI:Pakistan People’s Party (PPP) Chairman Bilawal Bhutto Zardari on Monday said that the Pakistan Tehreek-i-Insaf (PTI) government knew that it was the PPP, and not ‘Patwaris’ (Pakistan Muslim League-Nawaz) or Jamiat Ulema-e-Islam-Fazl (JUI-F), which posed a threat to its existence. Addressing a public gathering in Sukkur, he said that it was ironic that when Leader of the Opposition in the National Assembly (NA) belonged to the PPP, he was in jail, and when he belonged to Lahore (a reference to PML-N), he was free. He urged the party workers to stay awake so that the ‘incompetent government’ could be sent home. “PPP is the only party which is an obstacle in the way of the government. The party is in real opposition to the government. PPP is the only party in the country which talks about the issues of a common man,” he claimed. Again prophesying that this is the first and last term of the PTI government, PPP Chairman Bilawal asked the government not to take what he called its ‘repressive policies to the extent where it could not face the reprisal after relinquishing power. He said, “Lo and Behold! It is now PPP’s turn to form the government at the Center. And the party will give a befitting reply to the PTI once it takes over.” Bilawal said it was unfortunate that after throwing the PPP leader from Sukkur and former leader of the opposition Khursheed Shah in jail, the government was now after female members of his family. “We want to remind you that if you implicate our women in cases, you also have women in your families. But contrary to the PTI, we respect women,” the PPP chairman said. He exhorted PPP workers to get ready for a battle against the government. “We have neither left the country at the mercy of circumstances in the past nor will we do so in future.” He thanked the party workers belonging to Sukkur for playing an active role in PPP’s struggle for democracy; be it struggle against General Zia, General Pervez Musharraf, or what he called ‘selected’ Prime Minister Imran Khan.