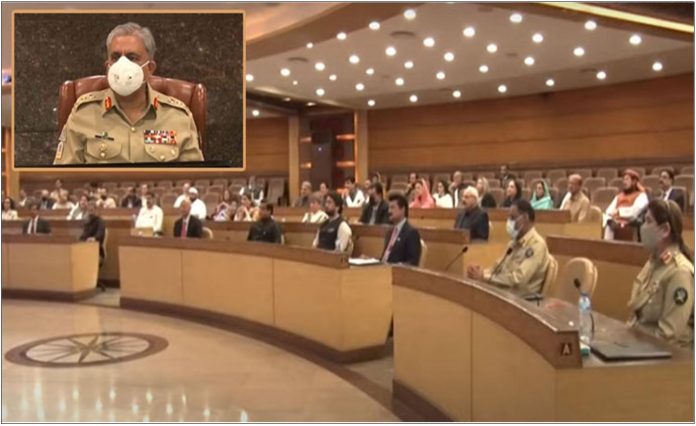 RAWALPINDI: A delegation comprising members of the Parliamentary Kashmir Committee and Defence Committees of the Senate and National Assembly visited the General Headquarters (GHQ) Rawalpindi on Monday, according to the Inter-Services Public Relations (ISPR). The delegation was given a detailed briefing on security environment, including the situation on the country’s borders and Pakistan Army’s efforts for peace and stability, the military’s media wing said. The parliamentarians had an “exhaustive interactive session” with Chief of Army Staff (COAS) Gen Qamar Javed Bajwa, it added. COAS Bajwa said that Pakistan’s armed forces with support of the nation have achieved unprecedented successes in its fight against terrorism and bringing normalcy in the country. “Due to our timely steps for western zone border management, Alhamdolillah today despite challenges Pakistan’s borders are secure and we are prepared to meet any situation,” he said. Alluding to the benefits of regional connectivity, Gen Bajwa highlighted the importance of restoration of peace in Afghanistan for sustainable development of the region and reiterated the army’s support and commitment to the Kashmir cause and people of Kashmir. “The world must know that without peaceful resolution of Kashmir issue, peace and stability will remain illusive,” he reiterated. The session concluded with a resolve to continue struggle against violent extremism through a synergetic, whole-of-the-nation approach., the military’s media wing said.