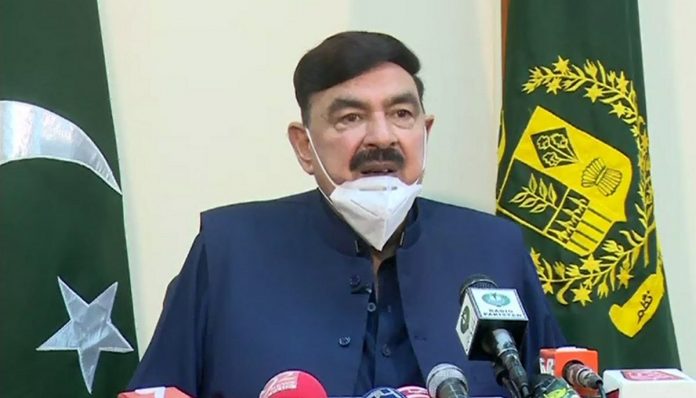 ISLAMABAD: Federal Interior Minister Sheikh Rasheed Ahmed said Monday that Pakistan has so far not given the status of refugee to a single person from Afghanistan. “I can confirm as your [the] interior minister that we have not given the status of a refugee to even a single person,” he shared during a news conference, a day before the US and other foreign troops complete their pullout from the war-ravaged country. The interior minister’s comments came as thousands of Afghans have sought to leave the country since the Taliban took control of the country last month. The US had also requested Pakistan to provide transit facilities after which Islamabad made arrangements at the city’s hotels. Rasheed clarified that people from Afghanistan arrive in Pakistan via the Chaman border on a daily basis and then go back to their country, adding that this was “a normal activity.” Regarding any possible influx of people from Afghanistan, he said that Pakistan has “made arrangements to accommodate 3,000 people in Islamabad only,” adding that “any person from any nationality, who comes to Pakistan from Afghanistan, will be granted a transit visa of 21 days.” He added that as of now, 1,627 people have entered Pakistan via the air route, while over 2,100 people arrived through the land route at Torkham. “We had been expecting a huge refugee influx from Afghanistan, but not a single person came to Pakistan as a refugee.” He said Pakistan Army is “the world’s greatest army”, adding that they had fenced the border and were keeping a close watch over the movement of people. Speaking further about developments in Afghanistan, the minister said that Pakistan had evacuated all but 30-40 citizens from the country. “Those 30-40 people want to remain in Afghanistan. They got married there and now have families. They told us they are happy in Afghanistan,” he added.