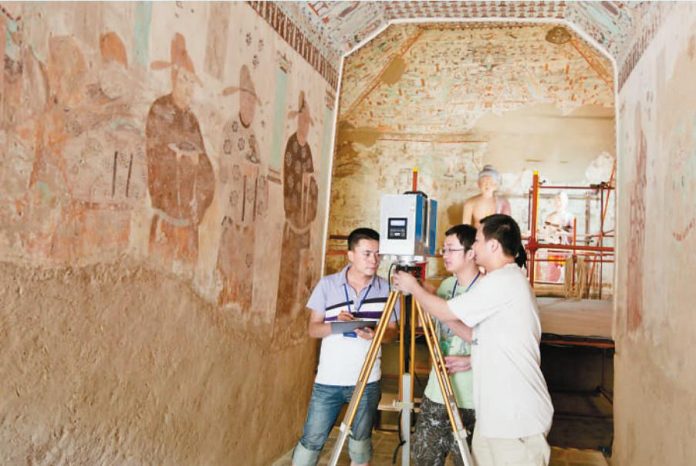 As soon as the virtual gate opened, magnificent ancient murals leapt to the eyes. Images of flying apsaras on these murals, including their clothing patterns, were vividly shown to the finest of details. As the viewing angles changed, everything in the caves was presented to viewers in front the computer screen.

Thanks to the use of digital technologies, researchers have created the 3D models of Mogao Grottoes without a single deformation in computer, allowing people to observe every little detail of the spectacular cultural heritage of the site even if they couldn’t visit the place in person.

For the groundbreaking achievement, scientific researchers of two generations in Dunhuang Academy China and Wuhan University worked ceaselessly for more than a decade.

Dunhuang Academy China began to explore the application of digital technologies in the preservation of cultural heritage in the 1990s, when digitalization was still a new term. However, the work had to be suspended after several attempts, as researchers lacked mature technologies and precision instruments and only had access to low-resolution film cameras.

In 2007, Zhu Yixuan, a professor at the State Key Laboratory of Information Engineering in Surveying, Mapping and Remote Sensing of Wuhan University, and her husband Li Deren, also a renowned expert in surveying and mapping, went to Dunhuang for investigation at the invitation of Fan Jinshi, then president of Dunhuang Academy China.

Seeing that the once bright colors of beautiful murals and delicate patterns of clay statues in Mogao Grottoes gradually fade as time passed by, they were deeply worried.

“We hope to help the ancient artworks in those caves transcend time and space through scientific and technological means, and revitalize Dunhuang with digital technologies,” Zhu said.

After tremendous amount of research and argumentation, the couple eventually decided to employ modern photogrammetry and remote sensing technologies to achieve 3D digital reconstruction of Mogao Grottoes and build a 3D digital model in computer.

In 2008, Zhu, who was then more than 70 years old, led a team made up of more than ten researchers from Wuhan University, including Huang, to Dunhuang. The main task of the research team was to scan Mogao Grottoes with 3D laser scanners, take pictures of the caves, and then process relevant data.

“To put it simply, we first scanned the grottoes to get their 3D frameworks and shapes and then added colors and patterns to them to create highly accurate and colored 3D models,” Huang explained.

Since the murals and Buddhist statues in the grottoes were created more than 1,000 years ago, they were already very fragile when these researchers tried to revitalize them through digital technologies.

“Some murals were extremely mottled and could be easily damaged,” Huang recalled, disclosing that researchers were very careful every time they used instruments in the caves of the Mogao Grottoes.

After obtaining the precious raw data, the research team found that the complexity of modeling and adjustment for a 1:1 digital replica of the UNESCO World Heritage site was far greater than expected. And traditional technological means of surveying and mapping couldn’t satisfy the needs of the task.

In an effort to solve the bottleneck, Huang went to Dunhuang again with his doctoral students Zhang Fan and Zhang Zhichao. They were determined to develop independent and controllable modeling software, for which they often skipped meals and sleep and programmed for more than 20 hours straight a day.

More than two months later, a software tool which can handle high-quality texture mapping for complex models of cultural heritage was finally created, breaking through obstacle blocking a critical link in the digitalization endeavor.

After the technical obstacle was overcome, Li put forward the idea of collecting more data to integrate Mogao Grottoes with its surrounding environment in digital models.

“Not only data on Mogao Grottoes, cultural heritage data in Dunhuang should all be collected and recorded so that we can provide more comprehensive information for the protection of cultural heritage,” Li said.

A year later, Huang went to Dunhuang the third time with several other teachers and students. During the over two months they spent in the city, these researchers conducted large-scale aerial survey with laser scanners carried by borrowed transport plane, and used ground laser scanners and close-range photogrammetry instruments to carry out a survey of the surroundings of Mogao Grottoes, including the precipices where grottoes are located and the ancient buildings of the site, obtaining all kinds of data on the cultural heritage site.

“In the past, we didn’t know the distance between grottoes as we didn’t have 3D data that can help see the whole picture. Now we are even able to tell the thickness of the walls, which offers important data support for the preservation of the grottoes,” Zhang Fan said.

According to Zhang, they collected 3D data that show the site from an overall perspective in 2016, which, in comparison with the data collected ten years ago, helped further enhance the protection for Mogao Grottoes.

“Our students are working on such subjects as virtual restoration of murals and system for the labeling and identification of damage to cultural relics. We will pass on the relay baton of protecting Dunhuang from generation to generation,” Zhang said.

Thanks to efforts to preserve and inherit cultural heritage of Dunhuang with digital technologies, cultural relics in the city have become more charming.