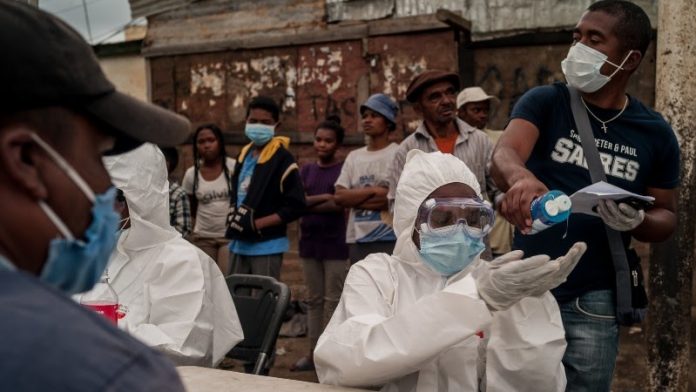 By Qu Song, People’s Daily
According to official data released by the U.S., the first case of COVID-19 infection in the country was reported on January 21, 2020, and the first death on February 29, 2020.
However, studies found some public health incidents occurring in the country since the second half of 2019 highly suspicious. They believe that the novel coronavirus might have existed in the U.S. before the first COVID-19 infection was reported.
As stated by a May article published on Clinical Infectious Diseases, one of the most heavily cited journals in the fields of infectious diseases and microbiology, researchers from David Geffen School of Medicine at the University of California, Los Angeles, detected severe acute respiratory syndrome coronavirus 2 (SARS-CoV-2) in 7 specimens from 6 patients, dating back to mid-January.
The researchers used a pooling strategy to look for SARS-CoV-2 in remnant respiratory samples submitted for regular respiratory pathogen testing from symptomatic patients from November 2019 to early March 2020. The earliest positive patient had no relevant travel history but did have a family member with similar symptoms.
The research presented strong evidence of community spread of SARS-CoV-2 in the Los Angeles area well before widespread diagnostic testing was performed in early 2020.
Nature Communications on June 8 published an article by a research team from the Icahn School of Medicine at Mount Sinai. The researchers utilized a sample pooling strategy to screen for previously undetected SARS-CoV-2 in de-identified respiratory pathogen-negative nasopharyngeal specimens from 3,040 patients across the Mount Sinai Health System in New York.
The patients had been previously evaluated for respiratory symptoms or influenza-like illness during the first 10 weeks of 2020. The researchers identified SARS-CoV2 RNA from specimens collected as early as 25 January 2020, and completed SARS-CoV-2 genome sequences from multiple pools of samples collected between late February and early March. The results provided evidence of sporadic SARS-CoV-2 infections a full month before both the first officially documented case and emergence of New York as a COVID-19 epicenter in March 2020.
According to a report published on the website of the National Institute of Health (NIH) of the U.S. on June 15, a new antibody test research jointly conducted by the NIH, University of California and Harvard Medical School checked specimens collected by the All of U.S. Research Program of the NIH, and found that COVID-19 infections took place in five U.S. states as early as December 2019.
With limited SARS-CoV-2 testing capacity in the U.S. at the start of the epidemic (January–March 2020), testing was focused on symptomatic patients with a travel history throughout February, obscuring the picture of SARS-CoV-2 seeding and community transmission, the report said.
Of the 24,079 study participants with blood specimens from January 2 to March 18, 2020, 9 were seropositive, and 7 before the first confirmed case in the states of Illinois, Massachusetts, Wisconsin, Pennsylvania, and Mississippi. The finding identified SARS-CoV-2 infections weeks before the first recognized cases in the 5 U.S. states. The earliest positive sample was collected on January 7, 2020 in Illinois. The median time from SARS-CoV-2 infection to IgG antibody presence is 14 days, so the finding suggested that the virus may have been present in Illinois as early as 24 December 2019.
The above finding was an expansion of a study published by the Centers for Disease Control and Prevention on Clinical Infectious Diseases on November 30 last year. The study examined blood donation specimens collected among residents of 9 states between 13 December and 17 January 2019 and found in them antibodies to SARS-CoV-2. It proved that COVID-19 was in the U.S. before December 13, 2019. It said data suggested the introduction of SARS-CoV-2 into the US may have occurred earlier than initially recognized, and that might explain why there were so many COVID-19 cases in the country.