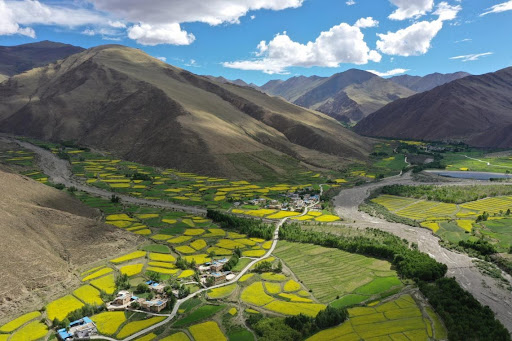 By Jiang Feng, Chungda Drolkar, People’s Daily
Tibet is now one of the best places in the world ecology-wise, thanks to the long-term efforts of the Chinese government to improve the autonomous region’s capability of ecological and environmental governance, and advance biodiversity protection on the Qinghai-Tibet Plateau.
With a firm determination to prioritize ecological conservation and boost green development, China is practically protecting the ecology of the “third pole” of the world.
“Drastic changes are taking place every day.” That’s how Padma Chog, 54, described the ever-changing environment in Tibet autonomous region. The Tibetan woman, who’s a ranger in Yani National Wetland Park in Nyingchi, Tibet, tracks trails of wild animals and growth of vegetation every day, together with 69 colleagues.
The Yarlung Zangbo River, the longest river in Tibet, converges with the Nyang River, its second largest tributary, in the wetland park, which was established in 2016.
At one time, sands were always exposed on the bed of the Yarlung Zangbo River after rainy season ended, and went up in the air with the wind. Besides, frequent sand excavation exacerbated the deterioration of environment.
“After the wetland park was set up in 2016, the humming of sand excavators disappeared,” said Tsering Drolma, head of the management bureau of the Yani National Wetland Park.
Ecological conservation calls for institutional protection. So far, Tibet autonomous region has unveiled and enacted over 60 regulations and provisions. In January this year, the National People’s Congress of the autonomous region adopted Tibet’s first comprehensive regulation on ecological progress.
Tibet banned visits to the core zone of the Mount Qomolangma National Nature Reserve by tourists without climbing permits, prohibited illegal crossing in the Chang Tang National Nature Reserve, and suspended tourism services relevant to the Purog Kangri glacier. These efforts were made to ensure valuable resources for future generations.
By 2020, Tibet had invested 81.4 billion yuan (about $12.7 billion) in ecological and environmental protection. Today, nature reserves cover 38.75 percent of the autonomous region’s land area, and an area of 608,000 square kilometers has been put under a red-line protection initiative for conserving ecology. Over half of the autonomous region is protected according to the strictest standards.
Besides, the comprehensive vegetation coverage of natural grassland grew to 47 percent, and the wetland area totaled 6.53 million hectares. Biodiversity is well protected and the water quality of major rivers and lakes maintained at a great level. The autonomous region enjoyed good air quality on 99.4 percent of days in the past year.
Tibet’s Ngari, nicknamed the “top of the roof of the world,” is known for its low oxygen content, coldness, aridity, and scarce vegetation. That’s why trees are very much cherished by local people.
Six or seven centimeters under a piece of grassland in Ngari, there is tundra. Afforestation is of huge difficulty there, as trees are not able to survive without cold-resistance, wind-resistance and ultraviolet ray-resistant measures.
A few years ago, a key canal irrigation project near the Gar River made a detour at the sacrifice of extended construction period and increased cost, just to steer clear of a century-old wood comprising over 1,500 rose willows.
In 2016, encouraged by the Ministry of Science and Technology and the government of Tibet autonomous region, multiple scientific research institutes and enterprises started putting their hands to high-altitude afforestation in Nagqu, which is adjacent to Ngari.
Twenty-nine patents have been applied over the past years, covering breeding, soil fertility enhancement, innovative management plans, windbreak, geomembrane, and sunshade net.
Today, over 300,000 trees have been planted under an afforestation base in the city, three quarters of which survived the winter.
According to the bureau of forestry and grassland of Tibet, the autonomous region planted nearly six million mu (400,000 hectares) of trees in the 13th Five-Year Plan period, or the past five years, increasing forest coverage to 12.31 percent. A total of 269,000 mu of forests has been planted in the basins of the Yarlung Tsangpo, Nujiang, Lhasa, Nyangchu, Yalong, and Shiquan rivers.
During the 13th Five-Year Plan period, the rate of urban sewage disposal grew from 50.19 percent to 96.28 percent in the autonomous region, and 97.34 percent of domestic waste in cities above county level were disposed hazard-free. A series of measures, including toilet revolution and environmental treatment, are boosting rural construction and vitalization.
Low-carbon and green development is trendy in Tibet today. By the end of 2020, clean energy had contributed nearly 90 percent of the installed power-generating capacity in Tibet. From 2015 to the end of 2020, 6.5 billion kwh of clean energy-generated electricity was transmitted
The greening efforts of Tibet are paying off, making lucid waters and lush mountains into invaluable assets. According to statistics, by 2020, rural tourism had created, directly or indirectly, 86,000 jobs for local farmers and herdsmen, resulting in an increment in annual per capita income of 4,300 yuan.