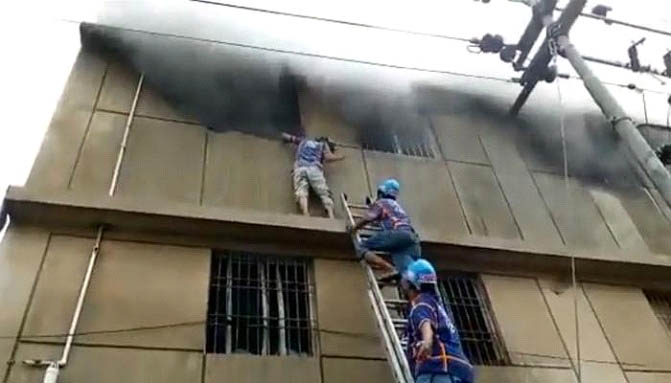 KARACHI: At least 17 labourers have lost their lives in a fire that broke out at a chemical factory in Karachi on Friday, citing rescue and government officials. According to Deputy Commissioner Korangi Samiullah Odho, 17 bodies have been pulled out from the factory premises. “We have not received any word regarding any more people being trapped inside,” he said. The blaze broke out today morning at a factory in Mehran Town, Korangi. According to Chief Fire Officer Mubeen Ahmed, after the bodies were retrieved from inside the building and the area was “cleared”, fire fighters swept the area once more for the satisfaction of the affected families who are in search of their loved ones. “After the search operation is complete, we will begin to examine the events that occurred,” he said, adding that no cause had yet been determined for the fire. Rescue officials said they had asked for heavy machinery to break the factory walls. It was earlier reported that they faced difficulties in the rescue operation due to smoke. Till 1:35pm, the police said more than 20 people were feared to be inside the factory. According to eye witnesses, the fire brigade arrived late to douse the blaze. But Sindh government spokesperson Murtaza Wahab denied these reports, saying that the fire broke out at 10:09am and the fire brigade was alerted and left for the scene by 10:10am. Jinnah hospital officials confirmed receiving 16 bodies, of which 12 have been identified and the the process to ascertain the identity of the remaining four is underway. Two firefighters were injured while trying to put out the blaze.