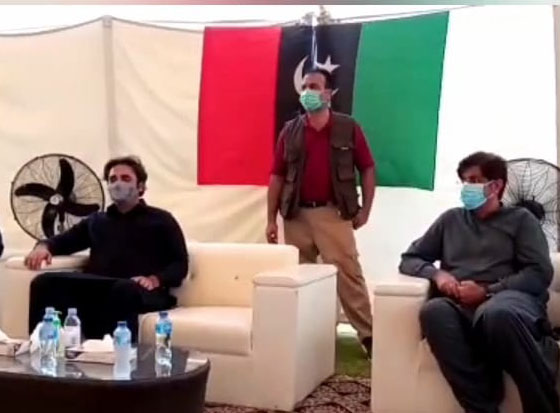 KARACHI:Pakistan People’s Party (PPP) Chairman Bilawal Bhutto Zardari Friday demanded the government to remove the reservation of the Chinese government over the CPEC and the recent terror events. Bilawal was addressing a press conference in Thatta on Friday and urged the government to implement the National Action Plan to stop terrorism in the country. Bilawal said Pakistan would not allow anyone to use the soil of Pakistan for terror activities. Discussing the Afghan situation, the PPP Chairman strongly condemned the recent bomb blasts at Kabul airport. The PPP chairman said water deficiency in Sindh province was increasing speedily and the Pakistan Tehreek-e-Insaf (PTI) government should not force them to hold a protest for the share of water. He warned the federal government of Imran Khan that they could stage a protest again if the gas and water would not be provided them as per the right of the province. Bilawal has rejected the progress report of the PTI government presented by Prime Minister Imran Khan before the masses and said inflation and unemployment was badly increased in his regime. The PPP chairman said his party would give relief to the people after coming in power. He said the PM had snatched 16,000 jobs to the youth of Sindh and the PPP would provide lawyers to the affectees. He ensured to hold an inquiry into the Mehran Town Fire incident and to punish the responsible. He also condemned the terror attacks on security forces in Ziarat, Balochistan.