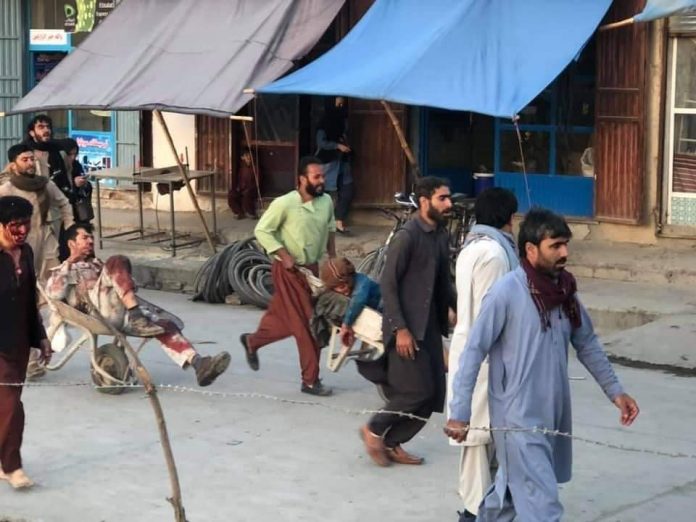 KABUL:Suspected suicide bombers struck the crowded gates of Kabul airport with at least two explosions on Thursday, causing a bloodbath among desperate civilians hoping to flee and casting the final days of the Western airlift of its allies into chaos. A Taliban official said at least 13 people including children had been killed. A surgical hospital run by an Italian charity said it was treating more than 60 wounded. The Pentagon said US personnel were among those hurt. Video images uploaded to the internet by an Afghan journalist showed a pile of bloodsoaked bodies in a street surrounded by debris. The man filming it was wailing. Pentagon spokesman John Kirby said one blast occurred near the airport’s Abbey Gate and the other close to the nearby Baron Hotel. Two US officials said at least one of the explosions appeared to be from a suicide bombing. Pentagon spokesman John Kirby separately said in a statement that “a number” of U.S. service members died in the attack but gave no specifics. Others were wounded and “a number of Afghans” also were victims, he said in another statement. The explosion took place amid crowds outside the airport, where desperate Afghans have been massing in hope of escaping in an airlift which the United States says will end by Tuesday following the swift capture of the country by the Taliban. There was no immediate claim of responsibility for the blasts, but Washington and its allies had been urging civilians to stay away from the airport on Thursday .because of a threat of a suicide attack by Daesh militants, enemies of both the West and the Taliban. Western countries have evacuated nearly 100,000 people, mostly Afghans who helped them, in the past 12 days. But they acknowledge that thousands more will be left behind following President Joe Biden’s order to pull out all troops by August 31. Several US officials said the blast appeared to be a suicide attack. A witness in Kabul saw many wounded men, women and children waiting for treatment outside a hospital. The Taliban official said many Taliban guards, who are securing the airport, were among the wounded. “Our guards are also risking their lives at Kabul airport, they face a threat too from the [Daesh] group,” said a Taliban official, speaking on condition of anonymity before the reports of the blasts.