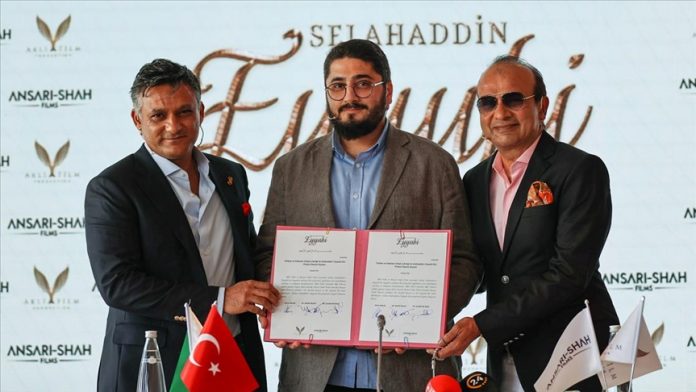 In the Turkish cultural and historical city of Istanbul, Pakistan and Turkey have jointly signed an agreement to produce a drama series on the life of the great figure of the Islamic world, Sultan Salahuddin Ayubi. Prominent figures from Turkey and Pakistan attended the event, which was held at a five-star hotel in Istanbul. The agreement is between Pakistan’s Ansari & Shah Films and Turkey’s Emery Konak’s Rational Films. The signing ceremony was widely covered by Turkish and Pakistani broadcasters. Speaking at the event, the producer of Rational Films, who has previously reached the heights of fame due to the popular Turkish drama series “Younis Emre” Beywaq Selchok and “Paya Takht Abdul Hameed”, said that it is one such The drama series about which the world of Islam was eagerly awaiting and the drama series will shed light on various aspects of the life of Sultan Salahuddin Ayubi and the misconception about the religion of Islam in the world. Speaking on the occasion, Dr. Kashif Ansari, Producer of Ansari Films, said that Turkish drama series has made its mark all over the world and Turkish dramas have become very popular all over the world. That is why we have decided to make a drama series using the services of Turkish producers so that our present generation and future generations can feel proud and tell humanity that with the thoughtful spirit of Islam, our The rulers of the past ruled the hearts of all humanity Producer Dr. Junaid Ali Shah in his address said that this will be a drama series which will be automatically drawn by the people. This drama series will not only bring the cultures of Turkey and Pakistan closer together but will also present the true culture of the Islamic world to the world so that the atmosphere of terrorism and Islamophobia against the Islamic world can be fostered. Help to remove it and make the world a cradle of peace as well as a true portrayal of the Islamic world.