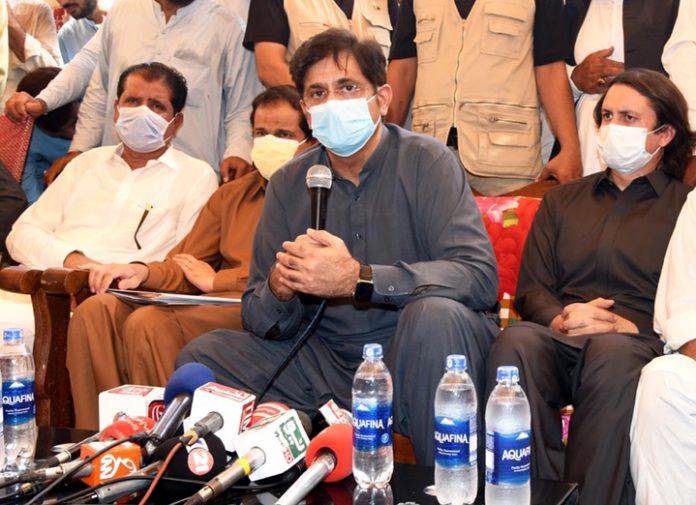 KARACHI: Sindh Chief Minister Syed Murad Ali Shah has said that Karachi being economic hub and industrial engine of the country has always been on the target of the terrorist but with our political will, support of its people and dedication of our law enforcement agencies the nefarious designs of the enemies have been nip in the bud. This he said on Saturday while talking to media just after offering condolence with the family members of Moach Goth tragedy which had claimed 13 lives and injured eight persons, including women and children at Sherpao Colony. He was accompanied by Provincial Minister Sajid Jokhio, Administrator Karachi Murtaza Wahab, MNA Agha Rafiullah, MPA Raja Razak and others. Mr Shah said that Karachi being the center of economic activities and backbone of the national economy has always been on the target of the enemies of the country. “We have problems on our Eastern and Western borders, therefore such kind incidents as happened in Moach Goth take place,” he said. The CM said that keeping in view the Afghan situation and Indian unrest he had chaired Apex Committee meeting to chalk out strategy to face the potential threat. “In the meeting we had given guidelines to the law enforcement agencies and engaged them in target operation against terrorists and drug mafia,” he said. Murad Ali Shah termed the Moach Mor incident as one of the coward attack against women and children that’s why no banned organisation or any other outfit has claimed the responsibility. He said that the culprits of the incident would be brought to book shortly. “Our police and other agencies were combing the hideouts of the terrorists and Inshallah they would be combed out shortly. The chief minister said that the law-and-order situation in Karachi was satisfactory. He appreciated the police, Rangers and other law enforcement agencies for conducting Ashura peacefully. Mr Shah offered condolence with the family members of the victims of the Moach Goth terrorist incident and gave a Rs14.44 million release order to Deputy Commissioner Malir Ganhwar Leghari to issues cheques of Rs1 million each to the heirs of deceased and Rs200,000 to each injured. He added that the amount of Rs 1 million was not the compensation of life but what he said `life was priceless’- “this is just a financial support to the bereaved family.” The chief ministers, just after visiting the Moach Goth incident victims went to Ibrahim Hyderi where heoffered condolence with the family of members of Mohammad Ali Shah, Chairman Pakistan Fisherfolk Forum, who died three days ago. The chief minister said that Mohammad Ali Shah struggled for the rights of fishermen and his services for the cause of his community would always be remembered.