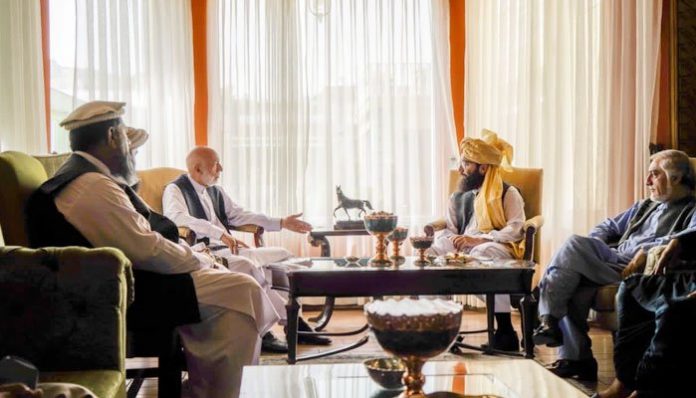 Taliban spokesman Zabihullah Mujahid said that the former Afghan senate chairman Fazal Hadi and other officials also attended the meeting, where the political leaders were provided with “foolproof security protocol”.

Separately, Haqqani also met Hizb-e-Islami chief Gulbuddin Hekmatyar.The US has classified the Haqqani Network of the Taliban as a terrorist network, holding it responsible for some of the most deadly militant attacks in Afghanistan in recent years.

The Guardian noted that “the group’s involvement in a future Taliban government is likely to be problematic for the international community”.

According to the British publication, a spokesperson for Karzai said that the aim of the meeting was to get the ball rolling on negotiations with deputy Taliban chief and head of the political office of the group in Doha, Mullah Abdul Ghani Baradar.

He led the talks for the withdrawal of US troops and it is expected he will hold an important role in the government to be formed in Afghanistan.

Baradar is likely to arrive in Kabul today, after landing in the Kandahar province a day earlier.

Negotiations between the Taliban and the High Council for National Reconciliation over the transfer of power are expected upon Baradar’s arrival.

The Taliban had completed their sweep across Afghanistan by taking over Kabul on Sunday, following the culmination of a 20-year invasion with the US’ withdrawal of troops. The country’s president Ashraf Ghani fled the country that same day “to avoid bloodshed”.

Though the Taliban have not indicated on what sort of power structure will take shape in the country, they have announced general amnesty for all and conveyed that they want to co-exist with the international community.