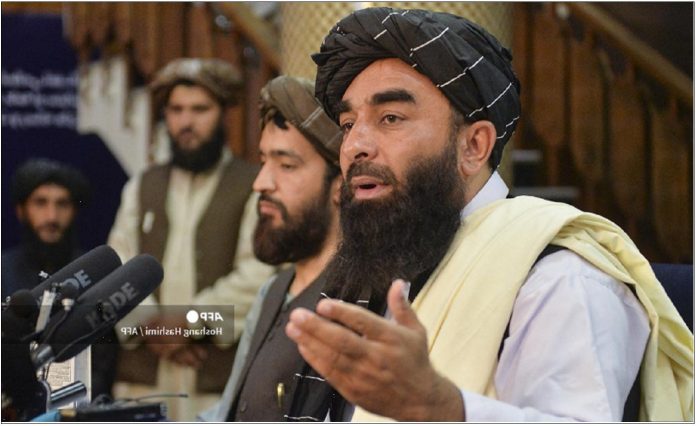 KABUL: Taliban spokesman Zabiullah Mujahid on Tuesday said that the insurgent group does not wish to “repeat any conflict, any war”. “We want to do away with the factors for conflict. Therefore, the Islamic Emirate does not have any kind of any kind of hostility or animosity towards anybody,” he said, in his first press conference since the Taliban overthrew the Afghanistan government. He added that all animosity “has come to an end”. “We would like to live peacefully. We do not want any internal enemies or external enemies,” he said. Mujahid noted that Afghanistan is at a historic stage where the country’s men and women are looking to the Taliban with regard to their future. “I would like to assure [them] that after consultations that will be completed very soon, we will be witnessing the formation of a strong, Islamic, and inclusive government, InshaAllah.” The spokesman claimed that when the Taliban forces entered the Afghan capital, Kabul, “there were no casualties”, terming it a “great development”. He said there were some rioters wanting to “abuse the situation”. “We realised that that problem was going on […] but we would like to assure the residents of Kabul of their full security, of protection of their dignity and security and safety. Security has been ensured. God-willing, day by day there will be more security,” he said. Mujahid said that the security of embassies is of “crucial importance” to the Taliban and wants to assure other countries of that those areas will have “complete security”. “Your representatives, your embassies, your missions, international organisations, aid agencies, we assure you we will not allow anybody to do anything against you. Your security is ensured. Our forces are there round-the-clock to ensure your security,” he said. He said that the Taliban “do not wish to see any kind of chaos” in Kabul. “Our plan was to stop at the gates of Kabul after capturing all other provinces,” the spokesman claimed, adding that a “smooth transition” of power was what the group had sought to avoid “trouble, harm and damages”. Mujahid, in criticism of the previous government, said that it was so “incompetent” that their security forces “could not do anything to ensure security”, forcing the Taliban to step in and “take responsibility”. “The abusers and rioters wanted to abuse the name of the Islamic Emirate to enter houses and harass people and steal, therefore we instructed our forces to enter Kabul […] and ensure security,” he said. He reiterated that all residents of Kabul should “rest assured” their security is “guaranteed”. Mujahid also sought to assure the international community and the regional countries that the Taliban “will not allow the use of Afghan territory against anybody”. “We are committed to this pledge. You will not be harmed anywhere from our soil,” he said.