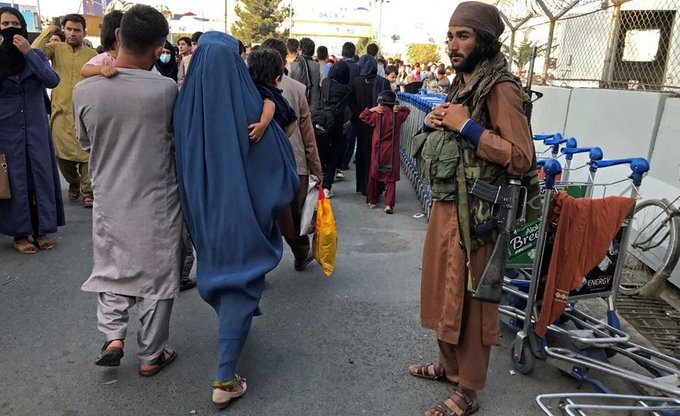 KABUL: Three Afghan citizens were killed Monday after falling off a United States aircraft as it took off from the Hamid Karzai Airport, British media reported Monday. As per the reports, three Afghan citizens hung on to the aircraft as it was about to take off from the runway. However, they fell down as soon as the aircraft took off and the landing gear retracted.  Reports say that all three civilians died due to the fall.  The horrifying sight of a man falling off the flying aircraft was captured on camera and shared by a Twitter user soon after the incident. The video showed a person, terrified of the ‘new’ Taliban rule in the country, still clinging to the aircraft even after it took off, hoping to make their way out of Afghanistan with no fear of the deadly consequence. The video surfaced on social media as the news of hundreds of Afghan citizens attempting to exit the country was already circulating. Another video from the airport shared on Twitter shows a swarm of people running along with the aircraft that was about to take off. Many of them were even trying to somehow hook themselves to the aircraft or still ‘get in’, just to avail even the least possible chance to leave the country after the Taliban takeover. Amid the withdrawal of US citizens and other foreigners from Afghanistan following the fall of Kabul, hundreds of frightened Afghan citizens also thronged to the Hamid Karzai Airport to leave the country. Scenes of panic and chaos were witnessed at the Kabul airport Sunday night and Monday, as a sea of people rushed towards the Hamid Karzai International Airport in a bid to catch flights out of the country after the Taliban takeover. After entering Kabul Sunday afternoon, the Taliban announced a general pardon and urged citizens not to leave the country out of fear and panic. However, several video clips went viral on social media in which thousands of Afghans could be seen running frantically towards the Kabul airport in hopes to secure a flight out of the country.