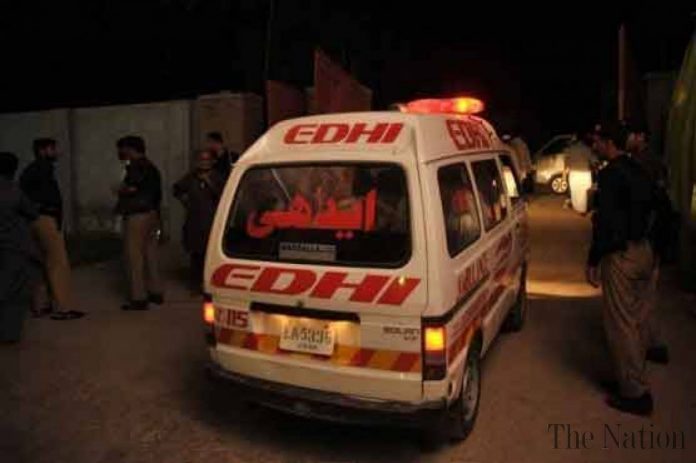 KARACHI: At least 11 people were killed and several others injured when a mini truck exploded in the city on Saturday night, in what initial investigations by authorities have determined to be a grenade attack. Senior Superintendent Police (SSP) Keamari said the incident took place in the city’s Mawach Goth after the mini truck driver had taken onboard a family from Baldia Town’s Pareshan Chowk. The family belonged to Swat. Additional Inspector General of Police Imran Yaqoob said that in the incident, which took place at around 9:30pm, a grenade was used, as established by remnants found from the site of the explosion. “We cannot concretely say who was behind the attack. It may be a family dispute, which we are trying to ascertain, or it may be an act of terrorism. But unless we have solid evidence, we cannot provide a final verdict on this. It will be premature to say anything at this stage,” he said. Yaqoob acknowledged that there was a large volume of people out on the streets due to Independence Day celebrations, but reiterated that it would be “premature” to say anything at this point. The AIG said that the police are trying to determine whether the grenade was already present inside the truck or whether it was tossed at the vehicle. Earlier, Counter Terrorism Department Incharge Raja Umar Khattab told the media that initial investigations point to the possibility of a hand grenade attack. “The grenade exploded before it could be lobbed inside the vehicle,” he said, adding that the assailants were “riding on motorcycles”.He said that the deceased family had been on its way back from a wedding. The bomb disposal squad said that they had found pieces of a “Russian-manufactured grenade”.The Civil Hospital administration said they received nine bodies and 10 injured people — two of whom are in critical condition. The deceased include five women and four children. Chief Minister Sindh Murad Ali Shah, taking notice of the incident, directed police and district administration to transport injured people to nearby hospitals, in District Keamari and West. Expressing deep sorrow over the incident, the chief minister directed the concerned authorities to provide all possible assistance to the affected families. Moreover, newly-appointed Karachi Administrator Murtaza Wahab contacted deputy commissioner Keamari and sought details of the tragic incident from him. Meanwhile, Minister for Interior Shaikh Rasheed took notice of the blast in Karachi and sought a report from the inspector general of police and the deputy inspector general of the Rangers paramilitary force. “The incident must be investigated from all possible angles,” he stressed. He assured the Sindh government of the Centre’s full cooperation and assistance in the investigation.