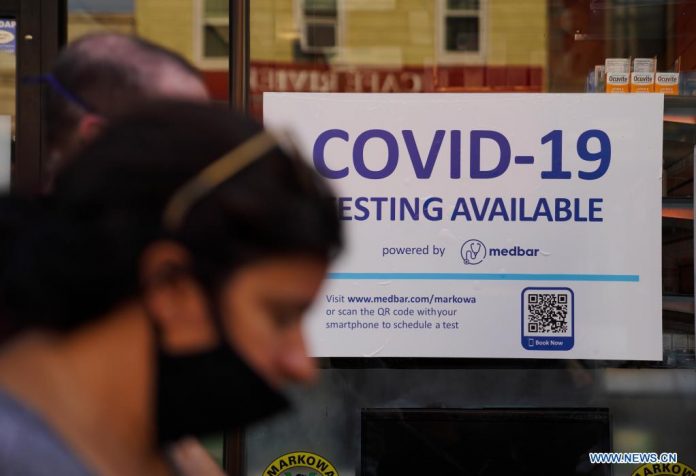 Members of the U.S. House of Representatives issued the so-called addendum to the origin of COVID-19 report on August 2, continuously hyping up the “lab leak” conspiracy theory without providing any reliable or scientific evidence.

The despicable and immoral practice has once again proven that American politicians have gone out of their minds in defaming China for political interests of their own.

As Delta variant rages across the globe, the cumulative number of confirmed cases in the world has neared two million. Meanwhile, core epidemic indicators in the U.S., including the daily numbers of newly confirmed cases, hospitalizations and death toll, have rebounded sharply.

At such a moment of crisis, U.S. politicians, in total disregard of the lives and health of people in their country, bent their efforts to politicize virus-tracing, stigmatize other countries and turn the origin-tracing study into their tool, severely hindering and sabotaging scientific and serious virus origin study as well as international cooperation in epidemic prevention and control.

These misdeeds of U.S. politicians, which have made them “accomplices” of the COVID-19 and become an even more destructive “political virus”, are neither moral nor supported by people in the world, and will only end in failure.

For a while, it has been reported that COVID-19 cases appeared in multiple places in the world during the second half of 2019. In the U.S., COVID-19 infections in at least five states happened earlier than the first confirmed case reported by the country.

This once again indicates that COVID-19 origin tracing, a complex scientific problem as it is, should be jointly carried out by scientists in the world based on a global vision.

However, U.S. officials have turned a blind eye to science and facts, and instead been obsessed with political manipulation, including seeking evidence for a conclusion reached beforehand and a presumption of guilt, aiming to make wild accusations against China.

To prove the presupposition that the virus escaped from a Chinese lab, they involved the intelligence community into the origin investigations in defiance of facts and science, and even suggested the government put up a reward for the “evidence” it wants. Such “origin-tracing terrorism” has become another demonstration of American hegemonic thinking and bullying acts.

Ever since the previous U.S. administration led by Donald Trump coined the term “Chinese virus”, the country has been slandering China for the pandemic. Through such political manipulation, it intends to scapegoat China for its own incompetence amid the outbreak and make yet another excuse for containing China’s development.

For this purpose, the U.S. has exhausted all the possibilities, including coercing and pressuring scientists so that they would give in to hegemony and bullying and support the “lab leak” theory. Many scientists who are unwilling to yield to power have suffered from personal attacks, abuse, and threats, some of whom even resigned their positions to stay true to science.

Therefore, to advance the origin tracing of the novel coronavirus, the world must wipe out the “political virus” of buck-passing, discrimination and coercion first.

Justice naturally inhabits people’s hearts. Lies of the U.S. will eventually be exposed.

In fact, the attempt of the U.S. to manipulate virus tracing has been widely opposed by the international community.

According to a survey gauging opinions from around the world carried out by CGTN Think Tank on major social media platforms, about 80 percent of the respondents believe that efforts to trace the origins of the novel coronavirus have been politicized,

So far, 70 countries have opposed politicization of virus tracing and expressed support for WHO’s report of a joint study with China on the tracing of COVID-19 origins by sending letters to WHO Director-General Tedros Adhanom Ghebreyesus, issuing statements, and through other ways.

Recently, politicians, media outlets, experts, and people from many countries have condemned the U.S. for politicizing virus tracing in various ways, while the U.S. tried to intimidate several other countries into joining its attempt to manipulate COVID-19 origin-tracing through political means, oppose science, and distort facts.

The stark contrast has shown clearly what the international community wants and supports.

The world will never forget that the U.S. accused Iraq of possessing weapons of mass destruction based on the “evidence” of a bottle of detergent in 2003. Such an absurd allegation is considered one of the biggest stains in U.S. diplomatic history.

If the U.S. plans to repeat such old tactics again, it will be an open insult to science, a terrible misjudgment toward China as well as a huge provocation to the rest of the world.

Just like the novel coronavirus, politicizing virus tracing is also a common enemy of the world.

U.S. politicians should realize that political manipulation will never find support from people across the world in the face of facts, science, and justice. They should focus their attention on fighting the virus and saving lives and quit playing the old tricks of political manipulation and buck-passing. Only in this way can they shoulder their responsibility for American people as well as the global public health course.