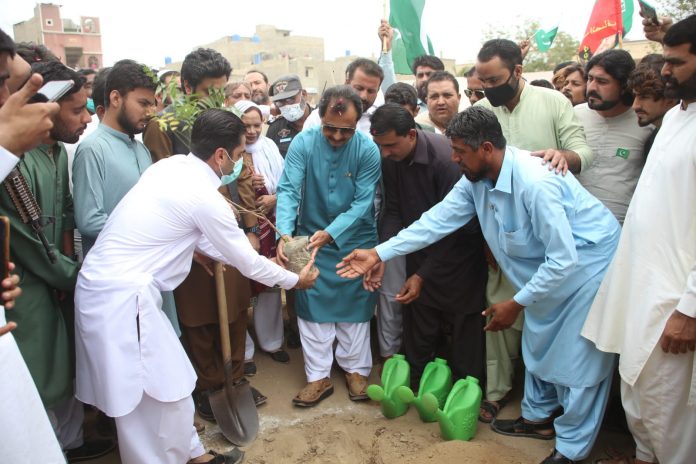 KARACHI, (14 August 2021): The leader of the opposition in Sindh Assembly, Haleem Adil Sheikh, Saturday, said that PM Imran Khan is steering the country into right direction to realize the dreams and vision of Quaid-e-Azam.

While talking to media in a plantation ceremony held here at Karachi in his constituency PS-99 in connection with Independence Day and Prime Minister’s clean and green program, Haleem Adil Sheikh stressed on people to plant at least one sapling on this Independence Day besides hoisting national flags and other celebrations.

Following the directives of PM Imran Khan a countrywide plantation drive was continue while plantation activities were geared up in Sindh as well to achieve the objectives of clean and green Pakistan, he said.

Haleem Adil Sheikh said that the nation was celebrating the I-Day this year with renewed resolve and sense of pride to achieve the objectives set by founder of Pakistan Quaid-e-Azam Muhammad Ali Jinnah.

All the state institutions were on same page and they conveyed clearly a message to world that Pakistan is a sovereign country and its leadership was capable of taking decisions independently while keeping the national interests supreme, he said and added that days has gone when Pakistani leadership used to be dictated saying why not on every demand of world powers.

India was using Afghan land for hatching conspiracies against Pakistan and attack on our Chinese friends in Gilgit Baltistan was also consequence of such mischievous plans, he said and maintained that Pakistan came into being on the name of Islam and no evil power could harm it.

“Now we are moving in right direction in unison and no one would succeed in their evil designs of derailing Pakistan from the track,’ he said and vowed that dreams of founding fathers of the nation would come true.

Meanwhile, the saplings were distributed by elected representatives of Pakistan Tehreek Insaf on Shahrah-e-Faisal and at Insaf House. Leader of the opposition in Sindh Assembly Haleem Adil Sheikh, Khurram Sher Zaman, Shahzad Qureshi, Adnan Ismail, Fiza Zeeshan and other party leaders distributed the saplings among the masses.