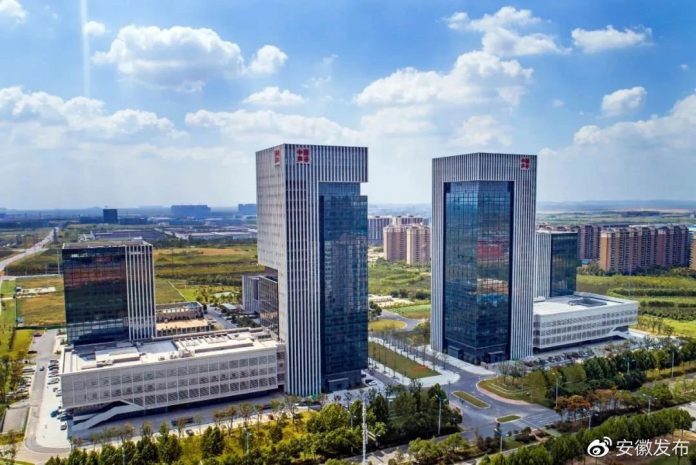 After more than eight years of development, China Speech Valley, an intelligent speech industrial cluster located in Hefei, capital city of east China’s Anhui province, saw the number of enterprises that it houses reach 1,024 and its operating revenue rise to 106 billion yuan (about $16.4 billion) last year.

Many well-known high-tech companies, such as Anhui Easpeed Technology Co., Ltd. and iFLYTEK Co., Ltd., are tenants of China Speech Valley. Every building of the industrial base has one or several AI companies, whose products range from algorithms and computing power to applications as well as software and hardware for safeguarding the security of data and network.

In Anqing First People’s Hospital of Anhui Province, patients can get appointment slips from contactless self-service registration machine after “tapping” at the air.

The health center of Sanjue township, Shouxian county, Huainan city of Anhui province has introduced an intelligent system to avoid misdiagnosis. Quan Xunzhi, a resident in Dongbu village of Sanjue township, is one of the patients who have benefited from the system.

After Quan told Yu Zhongping, a doctor of the health center, that she had felt dizzy for over a week and had no strength in her right leg, her condition was preliminarily diagnosed as “insufficiency of cerebral blood supply”.

However, after Yu put Quan’s previous diseases and current symptoms into the medical record system of the health center, a red message box was displayed by the system, suggesting that the patient may have cerebral infarction and should have a CT scan. Yu quickly arranged a CT scan for the patient and found that she really had cerebral infarction.

In 2017, the intelligent system, developed by iFLYTEK, passed the written test of the national qualification exam for clinical practitioners with a high score of 456, higher than that of 96.3 percent of the human candidates that year.

The system has so far been deployed in more than 30,000 grassroots medical institutions of 200 districts and counties across the country, helping 50,000 grassroots doctors make diagnosis. By offering an average of more than 400,000 pieces of advice and recommendations a day on diagnosis of diseases, it has benefited 50 million patients.

Over 20 years ago, Liu Qingfeng, founder and chairman of iFLYTEK, set up the company together with a dozen of young people after obtaining his doctorate from the University of Science and Technology of China, and started developing speech technology.

As iFLYTEK grew bigger, Liu realized that the company could only enjoy continuous development if it opened up its resources and capabilities to form an industrial chain and ecosystem. Therefore, the company officially established an open speech platform in 2010.

So far, iFLYTEK’s AI ecosystem has supported 4,000 companies, while its open platform has incubated 150 firms. At the same time, the company has made strategic investment in nearly 80 companies.

Over 2.19 million developer teams have been attracted to the open platform of iFLYTEK, which offers users 434 platform capabilities and a total of more than 1.15 million applications.

Business in China Speech Valley has by far been expanded from intelligent speech industry to all the fields related to AI.

For instance, the shipments of the smart bracelet under Amazfit, a brand of smart wearable device provider Huami Corporation in the industrial cluster, rank fourth in the world; H3C, a leading digital solution provider, has enjoyed the largest market share in network management software for four consecutive years in China; and Aisino Corporation, a contributor to smart city construction, will soon launch a smart tax service platform.

Because of its achievements in boosting AI development, Hefei has become an important front for innovation of global AI industry and was ranked fourth in China and 47th in the world on the list of the world’s most innovative cities in AI in 2020 by Tsinghua University-Chinese Academy of Engineering Knowledge Intelligence Joint Research Center and the Institute for AI Industry Research of Tsinghua University.