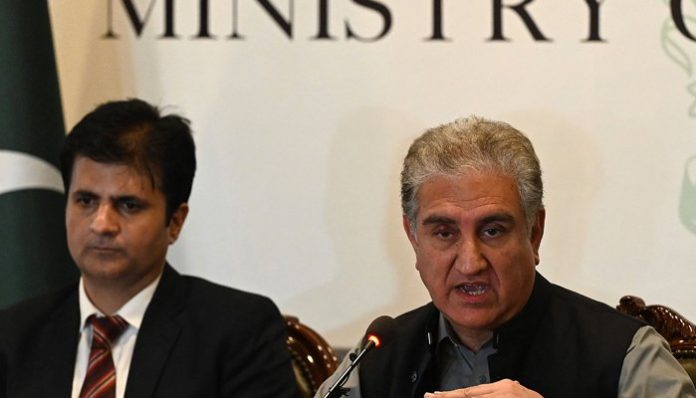 ISLAMABAD: Foreign Minister Shah Mahmood Qureshi on Thursday said India’s Research and Analysis Wing (RAW) and Afghanistan’s National Directorate of Security (NDS) were involved in the Dasu incident that occurred in July. Qureshi, addressing a press conference in Islamabad, said: “Afghanistan’s land was used in concocting the plan; the planning and execution link clearly to the RAW and NDS nexus.” At least 12 people, including nine Chinese nationals working on the Dasu hydel project were killed when a bus carrying them fell into a ravine following an explosion. An investigation into the tragic incident was carried out with the assistance of a 15-member Chinese security team. “The nexus cannot bear China and Pakistan’s growing cooperation and increasing Chinese investment in the country,” the foreign minister said, adding: “Alhamdulillah, they failed in their attempts.” Pakistani authorities have traced the handlers of the incident and the investigation revealed that the car used in the incident was smuggled into Pakistan, the foreign minister said. The probe also revealed that the terrorists’ primary target was the Diamer-Bhasha Dam, but when they failed there, they chose Dasu next, he added. The government arrived at a conclusion after taking into account several aspects of the investigation, said Qureshi. The authorities reviewed 36 CCTV cameras along the 1,400 kilometre route that the bus had gone through, he said. “We found a thumb, finger, and body parts […] which were later analysed,” said the foreign minister, adding that the authorities are fairly confident at this point that they must belong to the suicide bomber. Qureshi said that the authorities also recovered mobile phones from the bus — which had security personnel and Chinese nationals onboard — and the data on them was also examined. “We came to an initial conclusion that this was a blind case and could not be solved easily, but our institutions have successfully solved it,” the foreign minister said. He said more than 1,000 workers of the Dasu hydel project were scrutinised and interviewed. Furthermore, the car used in the incident has been identified as to where it came from and how it was smuggled into Pakistan, Qureshi said.