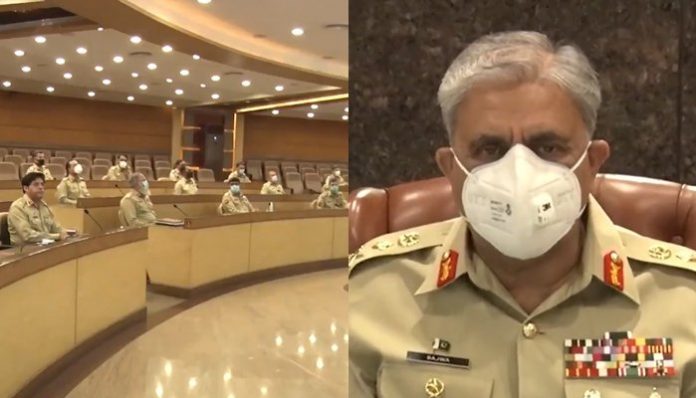 RAWALPINDI: Chief of Army Staff General Qamar Javed Bajwa has stressed avoiding misperceptions and scapegoating to counter the designs of spoilers in the Afghanistan peace process, the military’s media wing said Wednesday. The army chief’s comments came during the two-day 242nd Corps Commanders’ Conference. Gen Bajwa presided over the meeting, which was held at the General Headquarters (GHQ) in Rawalpindi. The COAS — reinforcing Pakistan’s vision for peace, connectivity, and shared prosperity — said the country has made every possible effort to facilitate the Afghan peace process leading towards a negotiated settlement with utmost sincerity and will continue to do so. “Being a collective responsibility, all stakeholders have to play their part positively for enduring peace in Afghanistan, which is pivotal for stability in the region,” the army chief said. The COAS expressed satisfaction over stringent measures being taken for ensuring effective border control as part of the comprehensive border management regime and asked for a high-level vigil along the Western Border. The army chief commended formations for maintaining high standards of operational readiness and providing sustained support to civil administration during ongoing national efforts against COVID-19, monsoon rains, and the national polio drive. Moreover, during the conference, the participants took a comprehensive review of the global, regional, and domestic security environment, the military’s media wing. The forum was also given a detailed briefing on the evolving situation along the Pak-Afghan border, its implications on Pakistan’s internal security — particularly in the western zone — and measures being taken to tackle emerging challenges. “Taking a holistic view of the multifarious security challenges faced by Pakistan in various domains in the evolving milieu, the forum underscored the need for adopting a whole nation approach,” the ISPR added. The development comes after the Afghanistan government removed Chief of Army Staff Lieutenant General Wali Mohammad Ahmadzai from his post, Sources said Ahmadzai has been replaced by General Hebatullah Alizai as the new Afghanistan army chief. In an earlier development, two more cities — other than the six that were seized by the Taliban earlier within a couple of days — fell to the insurgents Tuesday, with one of them only 200kms away from Kabul. The Taliban confirmed their seizure in separate tweets. Six of the other provincial capitals to have fallen since Friday are in the country’s north, with the insurgents setting their sights on Mazar-i-Sharif, the region’s biggest city. On August 6, Ambassador and Permanent Representative of Afghanistan to the United Nations Ghulam M Isaczai had said Pakistan should help Afghanistan in “dismantling” the Taliban for peace to prosper in the war-torn country. The Afghan ambassador’s comments came during an open meeting of the United Nations Security Council on the deteriorating situation in Afghanistan. “We request Pakistan to dismantle Taliban infrastructure and pipelines,” Isaczai said, noting that Taliban attacks are intensifying with every passing day.