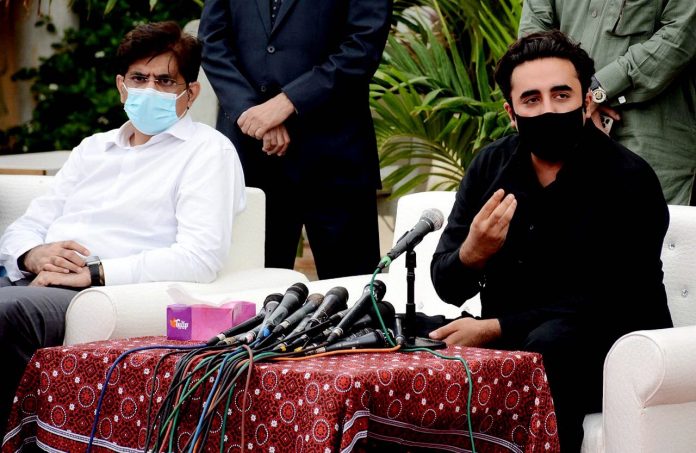 KARACHI: PPP Chairman Bilawal Bhutto-Zardari on Tuesday took a jibe at the Pakistan Democratic Movement, saying that the Opposition was “constantly winning” as long as it was following the policies of the PPP. Addressing a press conference in Karachi, Bilawal claimed that the PDM took part in the by-elections at his party’s suggestion, adding that the alliance was “running successfully as long as it was following the strategies devised by the PPP”. “While we will not attend the upcoming meeting of the PDM, we wish the alliance good luck,” he said. Bilawal said that a united show of force by the Opposition is needed to dethrone the current regime. “If the Opposition moves a no-confidence motion against [Prime Minister] Imran Khan and [Chief Minister Punjab] Usman Buzdar, then we can have the government ousted tomorrow.” He also criticised the federal government for depriving Sindh of funds and said that it is “unhappy” because of the work the PPP is doing for Karachi “day and night”. “Neither does the government want to do something for Karachi itself, nor does it want us to do anything,” he said, adding that despite having limited resources, the PPP is not only working to resolve the issues of Karachi but is also employing efforts to develop other parts of Sindh. “People can see the current government’s injustices and that the PPP is the only solution to their problems, therefore, PPP will succeed in forming the next government in Pakistan,” he said. Bilawal was of the view that the PTI-led government is “very unstable” and said that the PPP is expecting general elections to take place “at any time.” Bilawal also spoke about the recent bomb blast in Quetta and demanded that the government implements the National Action Plan to deal with terrorists.