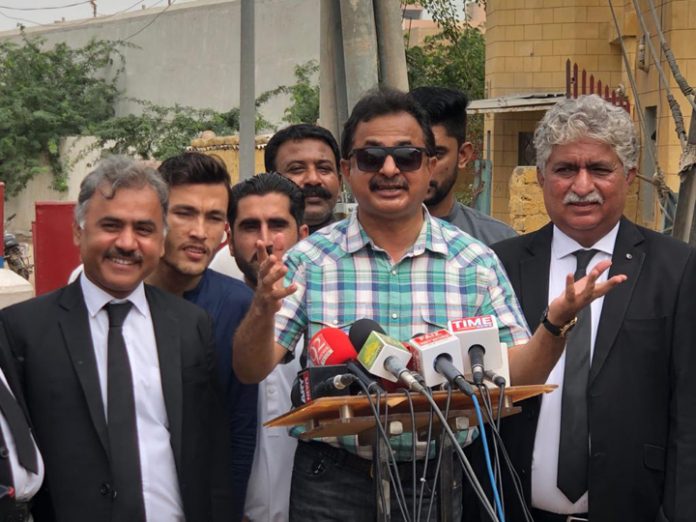 KARACHI: The opposition leader in Sindh Assembly, Haleem Adil Sheikh, Saturday, maintained that it was the last tenure of PPP government in Sindh as people of the province were fade up of their policies of plunder and corruption in the province. He expressed the views while talking to media persons after hearing of Malir by-elections and anti-encroachment operation cases in Anti Terrorism Court here at Karachi.   Earlier, Haleem Adil Sheikh and others appeared before the anti-terrorism court at the Central Prison Karachi. Due to absence of government prosecutor and non provision of copies of challan to the respondent , the ATC adjourned the hearing of the case to August 30.  Later, talking to media persons outside the Central Prison Karachi, Haleem Adil Sheikh said that he had appeared before a court in Ghotki the other day while he was present here at Karachi on the next day.  “I have to appear before the courts in Malir and Umerkot as well as anti-terrorism court,” he said adding that his crimes should be unveiled before the people of Sindh who were watching that opposition leader  was attacked at a time and then falsely involved in cases of terrorism as well. In Sindh only one case was filed in anti-corruption courts in previous seven months and that one was against a head constable of police, he pointed out and inquired, if corruption was totally rooted out from the province?  PTI leader said that he was advocating the deprived and marginalized people of Sindh and was antagonist to the terrorists who were fleecing  the resources of the province and violating rights of the people.  PPP has been plundering the resources of Sindh since 13 years and people were being deprived of their fundamental rights and basic amenities, Sheikh said asserting that it was Asif Zardari’s last term and he was not seeing PPP come in power in Sindh again. He alleged the PPP Sindh government for ruthlessly spoiling the provincial institutions and said that now they handed over the economic hub of the country Karachi to a person who was rejected by the people of the metropolis.  PPP left no stone upturned to destroy Karachi and now remaining work would be done by Murtaza Wahab who was placed their to cover up their wrongdoings of the past, Haleem maintained adding that the step was taken without any consultation with other stakeholders.  Moreover, some provincial ministers were holding more then two portfolios while a herd of advisors and special assistants was included in the cabinet at the same time, the opposition leader said and added that they would move the courts against illegals steps of the provincial government.  Federal institutions were being mobilized in the province to ameliorate the situation while Prime Minister Imran Khan would also visit and hold public gatherings in Sindh, he said. Federal government earmarked Rs 25 billion for dredging and clearing  of main disposal channels including Gujjar, Orangi and Mehmoodabal nullahs in the provincial capital, Sheikh added.  Federal government was also taking care of basic issue of transport in the metropolis and people would see green line bus service plying on the roads of Karachi in September while work was also in progress on Karachi Circular Railway and Motorway projects, he noted.  Haleem Adil also lamented the provincial government’s unilateral and arbitrary decision of imposing harsh lockdown in Sindh and remarked that such decision would cast negative impacts on national economy as a one-week long lockdown might drag the country’s economy several months back.  Livelihood of millions of people depends on daily wage works while health facilities in the province were not adequate as well, he observed and informed that Rs 5 billion were sanctioned in the previous year for Sindh government to deal with COVID-19 situation but they had spent not a single rupee and the entire budget lapsed. Sindh government did not procure a single dose of corona vaccine so far, he further added. PTI leader appealed the masses to adopt the precautionary measures, wear face masks and get them vaccinated against the contagion as lack of health facilities even shortage of hepatitis and anti-rabies vaccine in public hospitals dis not bother the provincial executive.