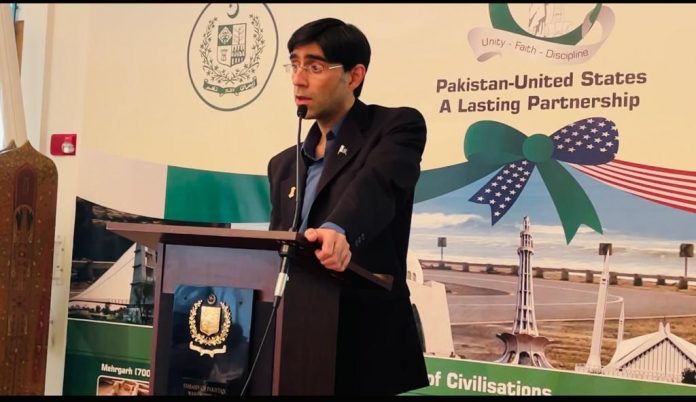 He emphasized that the government of Prime Minster Imran Khan and people of Pakistan were heavily invested in getting the Kashmiri brethren their right to self-determination.

Moeed Yusuf was speaking at a special event organized by the Embassy of Pakistan in Washington DC to observe the Youm-e-Istehsal Kashmir on the second anniversary of India’s illegal and unilateral actions of 5 August 2019 in the disputed territory of Jammu and Kashmir.

Dr. Moeed Yusuf said that Pakistan would continue to avail every possible political, diplomatic and legal option to achieve this objective.

Messages of the President and Prime Minister of Pakistan were read out on the occasion. A Special video message from President Azad Jammu and Kashmir and a short documentary highlighting the context of Indian illegal actions of 5 August 2019 were also screened.

Ambassador Dr. Asad M. Khan lauded the role of the Pakistani and Kashmiri American community in highlighting the gross human rights violations in IIOJK and bringing the voice of innocent Kashmiris to the US government and halls of U.S. Congress.