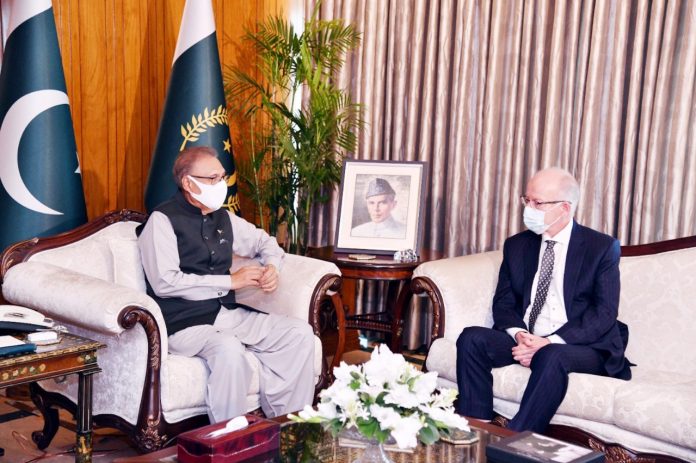 ISLAMABAD: President Dr Arif Alvi on Friday said presence of a large number of Norwegian companies in Pakistan was a testimony to the growing trade relations between the two countries.
Talking to the outgoing ambassador of Norway Kjell-Gunnar Eriksen here at the Aiwan-e-Sadr, the president said huge potential existed between Pakistan and Norway to further boost economic cooperation for the mutual benefits of their two people.
Dr Alvi expressed confidence that Norway was a strong partner of Pakistan in areas of investment, trade and development and stressed for enhanced cultural relations.
He said the collaboration between Nizam Energy and Norwegian Scatec Solar to build solar plant in Sukkur was a positive development and would encourage other Norwegian companies to take benefit from the investors-friendly environment of Pakistan.
The President also highlighted the brutalities being committed by the belligerent neighbour in Indian Illegally Occupied Jammu & Kashmir (IIOJ&K) against the Muslim population. He emphasized that the international community needed to fulfil its commitment to grant the people of Kashmir their right to self-determination in accordance with the UN Security Council Resolutions.
The president thanked the Norwegian government for restoring and conserving the historical heritage in Lahore.
He congratulated Kjell-Gunnar Eriksen on completion of his tenure as ambassador and appreciated his efforts in promoting relations between the two countries in all fields, particularly in economic and cultural sectors by establishing linkages with the public and private sectors.