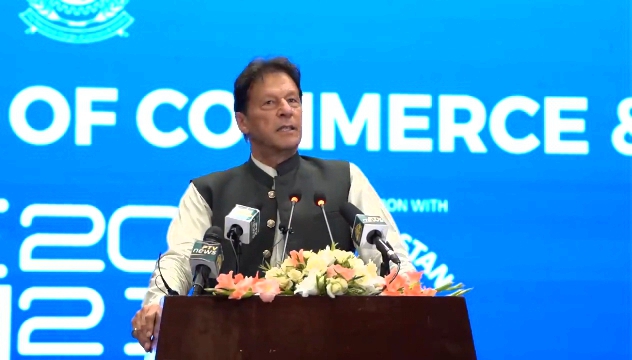 ISLAMABAD: Prime Minister Imran Khan Monday said that government was fully committed to encourage and facilitate different sectors of economy for the purpose of wealth creation to permanently overcome the financial challenges.
The prime minister said that government was vigorously implementing its plans to promote construction industry and incentivized the export sector because when economy moved on, the revenues were generated leading to jobs creation and prosperity.
He was addressing as chief guest at the closing ceremony of a three-day ICEE (Interior, Construction, Electrical and Electronics) Expo, titled,’ Building Clean and Green Cities’ organised by Rawalpindi Chamber of Conference and Industries (RCCI) in collaboration with Naya Pakistan Housing and Development Authority (NAPHDA) here at Pak China Friendship Centre. Sharing his vision for Naya Pakistan, the prime minister said their first priority was to pull the people from poverty as about 25 per cent of the total population of the country was living under the poverty line whereas another chunk of some 25 per cent was living on the margins of this line.
The prime minister regretted that there was a time when the Asian tigers looked towards Pakistan in terms of progress and development as it was considered ‘as model for development’.
But then the country went hurtling down from the path of unprecedented development, he said, adding Pakistan was blessed with huge potential and its various entities performed outstandingly in the past.
The prime minister expressed the resolve that the government would take Pakistan to its real destination.
Underling the need to become self reliant, the prime minister said when a system became corrupt, it ultimately putrefy the society. “It is called a system of corruption,” he observed.
The prime minister said those countries had become bankrupt where ruling and elite classes reveled in corruption without having rule of law. In those societies a small fragment of society became richer, pushing the poor segments into further poverty.
The prime minister said that on August 9, they would be launching Kamyab Pakistan programme under which the underprivileged families would be facilitated with technical education and extension of interest free loans.
One member from each poor family would get technical education, each family would get health card with worth one million free of cost treatment facility, besides through micro- financing, they would be given interest free loans for the construction of homes.
The prime minister noted that due to lack of planning and consideration by the past rulers, Katchi abadis had sprawled across the country. He said Karachi alone, consisted of 40 per cent katchi abadis.

About steps taken to facilitate the construction industry, he said the government had worked over implementation of the foreclosure law as there was no concept of house financing in the country.
In Pakistan, only 0.2 pc loans were extended for the home construction whereas in India, such ratio was 10 per cent, in Malaysia 30 % and in the rest of Europe and the US, it stood more than 80 %, he said
The prime minister said for the first time in the country’s history, an opportunity was provided to poor segments of the society to seek loans for low cost housing.
The government had also subsidized the interest rate in the Naya Housing Pakistan project and froze it to 3 and 5 per cent, enabling the low income families to divert the earning amount to construction of their homes at affordable monthly installments instead paying the rent.
He observed that system often decayed when instead providing facilities, it created hurdles. After holding different meetings, the prime minister shared that he realized these hurdles in the construction industry and slowly and gradually removed them.
He further added that Pakistan was a country with a thriving market of 220 million people but still they were importing almost all items. Why steps were not taken to scale up the economy? he posed a question. In the past, no one ever thought of the coming generations, he added.
The prime minister said that they had taken steps to increase country’s exports. A country could not progress till its current account deficit was overcome and stressed upon wealth creation and expanding the country’s financial resources.
If wealth creation was not achieved, it could chock country’s economy, he cautioned.
About government’s initiatives to counter effects of global warming and climate change, he said Ten Billion Tree Tsunami was an endeavour in this regard.
Terming the environmental challenge as a big one and an active reality, he said climate change worldwide had resulted in the erratic weather patterns.
The prime minister regretted that Rawalpindi had turned into a city of concrete slabs. During the year 1914, the city had received snowfall. Lahore and Peshawar were famed as cities of gardens, but all the major cities were now expanding at rapid speed.
He said Islamabad had witnessed huge expansion and construction during the period 2010 to 2020. The prime minister said that he had directed for master plans of all cities under which no construction would be carried out on the green belts, in and around the cities.
The prime minster said that now they were planning new cities with horizontal construction and cited new Ravi city which would have a forest with 70,000 trees and a water lake. This planning would save Lahore city and protect the Ravi river which had turned into sewage drain.
He further maintained that government’s lands and properties were being retrieved from the powerful mafia.
He said they wanted to leave a better future for the coming generations.
The prime minister citing the food security as another challenge, said that despite having bumper wheat crop this year, Pakistan had imported 40,000 tons of wheat.
He also lauded the efforts of RCCI for arranging the expo.
President RCCI Muhammad Nazir Mirza said with construction boom, about 42 allied industries were also witnessing huge activities.
He said the allied industries had gathered in the expo with determination to play their role in the construction phase under the vision of prime minister.
Mirza further said that RCCI was also taking an active part in the tree plantation drive. They had distributed 100,000 saplings so far and would also participate in the current monsoon drive. He suggested that industrial economic zones could be set up along the Rawalpindi Ring road project.
Chairman NAPHDA Lt. Gen. (retd) Anwar Ali Haider said that through innovative technology and incentives, construction could be made affordable.
He said that construction activities reflected the economic progress in the country. Construction industry was linked with the country’s progress and prosperity; therefore, the government had given different concessions and tax reduction to this sector, he added.