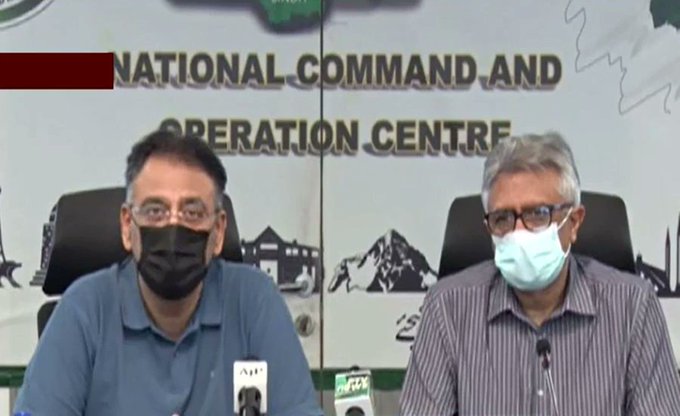 ISLAMABAD: Federal Minister of Planning and Development and chief of the National Command and Operation Centre Asad Umar on Sunday said that the fourth wave of the coronavirus pandemic, driven by the Delta variant, is hitting the country had as infections continue to spread rapidly. Speaking during a press conference in Islamabad alongside the Special Assistant to the Prime Minister on Health Dr Faisal Sultan, Umar said that despite the rising number of cases, the situation in Pakistan is not as bad as other countries in the region, including Bangladesh, Afghanistan, and Indonesia. He said that the total number of COVID-19 vaccinations in Pakistan have cross 30 million, adding that the country is making “good progress” with the pace of vaccinations. More than 10 million doses have been administered in the last 16 days with five million administered last week, Umar said, adding that even “superpowers have not been able to achieve what Pakistan has” in terms of vaccination. The federal government is spending Rs200 billion on vaccines and, currently, three thousand mobile units are providing door-to-door vaccination services, he said. The minister also pointed out that delays in shipments have led to a shortage of vaccines in the country. Umar also shed light on the curbs that the federal and provincial governments have imposed in different cities of the country to contain the spread of the virus and said that both the Centre and the provinces “are in this situation together.” He, however, highlighted that decisions should be made by a central authority (the federal government), otherwise, it would lead to mismanagement and cause trouble to the masses. He emphasised that the NCOC has “nothing to do with politics.” Pertaining to the issue of sanctions, Umar stated that restrictions should be imposed in a targeted manner so that the employment of people is not affected. The NCOC boss stated that the main spread of coronavirus is because of the Delta variant — which first emerged in India — adding that it spreads faster than the British variant. He added that he would make recommendations to the prime minister regarding the coronavirus situation tomorrow (August 2).