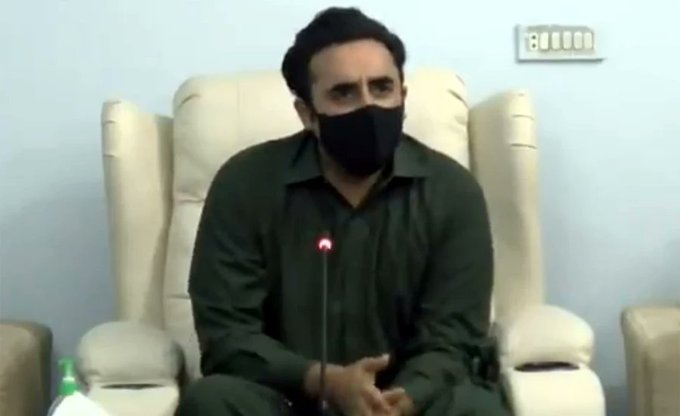 KARACHI: Pakistan People’s Party Chairman Bilawal Bhutto Zardari has said the PPP can topple Usman Buzdar’s government in Punjab and Imran Khan’s premiership if the opposition parties back it. Addressing a press conference, the PPP chief said he can talk to Pakistan Muslim League-Nawaz President Shehbaz Sharif if it is needed. In reply to a question, he said the PPP will get rid of Imran Khan and other selectors from Karachi to Kashmir as it has clarity and the opposition parties will soon have clarity. The PPP is ready to play the part of opposition solely and it will stand firm on its principle stance, he added. About Prime Minister Imran Khan’s plan to visit Sindh to activate the PTI, Bilawal said the Imran-led party will face an exemplary defeat by the PPP. He recalled the the PPP’s victory in by-polls and its emergence as the major opposition party in AJK election, though its mandate was stolen. He added the people of Sindh and even the people of the country have come to know that he (Imran Khan) has brought in poverty, joblessness and disaster in the name of change. Imran’s face has been exposed and the Sindh people know that he (Imran Khan) has been depriving them of their rights since he came to power after 2018 general election, the PPP chairman said and mentioned water woes, energy crisis and census issue which have been hitting the Sindh province hard. Bilawal said in the battle for ballot but it pushed the ruling party to sixth and seven position. Imran’s dreams of clinching victory in Sindh but an exemplary defeat awaits him, the PPP chief said, adding that Karachi where his (PM’s) minister was elected, his party got sixth position in bypolls, in Malir it stood 7th and in Sanghar, the PTI could get 10-20 votes. The PPP will defeat political orphans who have joined the PTI bandwagon and continue its journey of success.