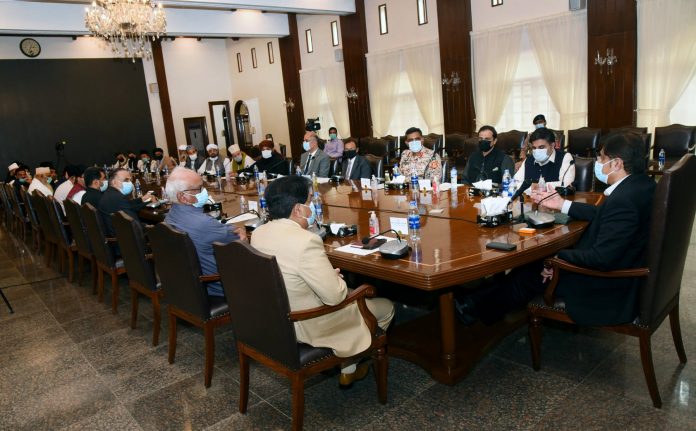 KARACHI: The province’s top brass held a meeting with religious scholars belonging to different sects to seek their help ahead of Muharram-ul-Haram and Rabi-ul-Awwal to curb coronavirus spread as the holy months are marked by large processions. CM Shah, Sindh Minister for Information and Local Government Syed Nasir Hussain Shah, Sindh Chief Secretary Mumtaz Shah, and other officials were present during the meeting. CM Shah said the provincial government would provide security and other required facilities for the religious events that take place during the holy month. “The new wave of the coronavirus is dangerous this year, just like it was last year. Karachi is severely affected by COVID-19, and we are about to take some strict steps,” he told the meeting. The chief minister said the provincial government has also been forced to take some strict measures due to developments in Afghanistan, amid fears of an influx of refugees. “The decisions which we take should be implemented in letter and spirit; [processions] should take place only on designated routes,” the chief minister said. Minister for Information Nasir Shah said Sindh had called a meeting with religious scholars earlier as well, where they were briefed about the security arrangements. He said the provincial government is making arrangements for the security of the ulema, adding that an Aman Committee had been formed under which all the concerns put forth by the scholars will be addressed. Following the chief minister’s briefing, the religious scholars agreed to follow the government’s orders. “The government’s code of conduct will be followed during Muharram-ul-Haram and coronavirus SOPs will also be implemented,” the religious scholars assured the gathering.