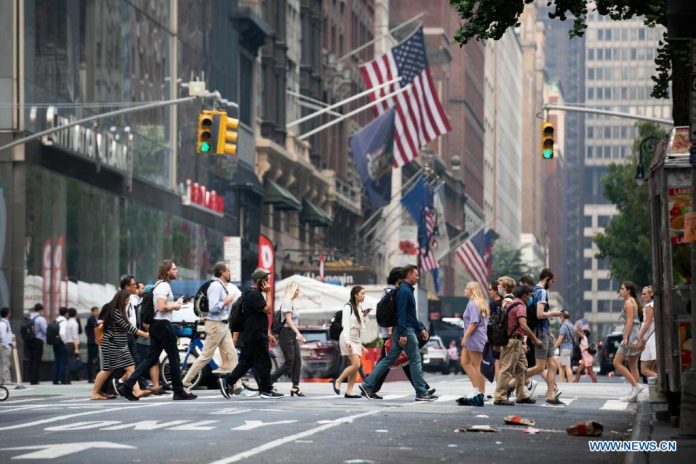 By changing evaluation indicators, American media recently ranked the U.S. first among 53 economies in the world for its return to normal life amid the pandemic in its “COVID Resilience Ranking”. Ironically, core indicators of the COVID-19 situation in the country, such as the daily numbers of newly confirmed COVID-19 cases, hospitalizations, and deaths, rebounded seriously. Increase in the number of COVID-19 infections is rising in all of its 50 states, while growth in vaccination rates has all but stalled.

The contrast between the ridiculous COVID-19 resilience ranking and the harsh pandemic situation has revealed how anxious some people in the U.S. are to cover up the country’s failure in response to the pandemic, which is also the root cause of the attempt of some U.S. politicians to shift the blame for their own incompetence in fighting the pandemic to other countries by stigmatizing acts of other countries regarding the pandemic, attaching geographical labels to the virus, and politicizing COVID-19 origin tracing.

However, no matter how certain U.S. politicians indulge themselves in wishful thinking, they can’t rid themselves of the burden of social problems at home.

The deep-seated social problems in the U.S. are unavoidable pitfalls in the country’s response to the COVID-19. Issues like racial divide, the gap between rich and poor, and social division are profound and important reasons behind the country’s failure to control the pandemic.

In the U.S., where the society is deeply divided, fighting the COVID-19 through solidarity seems merely a slogan out of reach.

“Nations, like individuals, reveal themselves at times of crisis,” wrote BBC’s New York correspondent Nick Bryant in an article published on the website of BBC.

“Rather than a coming together, the crisis has demonstrated how for decades Americans have conducted a political version of social distancing,” the article said, going straight to the heart of the matter.

In a poll carried out by NBC News in April, 82 percent of the respondents said they believe the U.S. is divided and racial and political tensions are escalating in the country.

Well-known American political scientist Francis Fukuyama pointed out that in the face of an unprecedented pandemic, Americans should have put aside differences and fight the crisis in solidarity, but overall, the COVID-19 has exacerbated political polarization in the U.S.

In the U.S. society plagued by deep-rooted racial divide, the process of combating the COVID-19 tells more of a story about inequality. Compared with white Americans, people of the ethnic minority groups in the U.S. have faced much higher risks of infection, hospitalization and death, and yet shown far lower vaccination rates.

According to data released by the U.S. Centers for Disease Control and Prevention (CDC) in June this year, Hispanic Americans are twice as likely as whites to be infected with the novel coronavirus, 2.8 times as likely to require hospitalization for the treatment of COVID-19, and 2.3 times as likely to die from the virus.

“It’s a story of structural racism that has its origins over the past centuries,” David Asch, executive director of the Penn Medicine Center for Health Care Innovation, recently said after conducting studies of COVID-19 related racial differences.

In the U.S., a country that faces widening gap between rich and poor, the amount of wealth determines individuals’ rights to life and health. A reality that many American families have to face is that they don’t dare to receive medical treatment because they don’t have medical insurance.

Poor people are being hit the hardest by the COVID-19 in the U.S., said Philip Alston, United Nations Special Rapporteur on extreme poverty and human rights, explaining that the poor in the U.S. are more susceptible to the virus and face a higher mortality rate from the disease.

The COVID-19 pandemic has further broadened the gap between rich and poor in the U.S. When tens of millions of Americans lost their jobs and sources of income because of the pandemic, over 650 billionaires in the country saw their combined wealth increase by $1.3 trillion during the past year.

“The COVID crisis is crushing people of color and low-income workers while billionaires who are nearly all white have seen fortunes skyrocket,” pointed out Frank Clemente, executive director of Americans for Tax Fairness.

The COVID-19 pandemic has become a magnifier and catalyst for social problems in the U.S., exposing a typical American-style crisis. Such a socially divided country is doomed to failure in the fight against the pandemic. And placing the U.S. at the top of the “COVID Resilience Ranking” is merely a self-deceiving trick the country plays.

Those U.S. politicians who are obsessed with crooked ways had better bring their minds from delusions to the reality and face up to and solve internal problems of their society, as it is the only right way. If they continue to pass the buck, they will only add to the suffering of people in their country.

(Zhong Sheng is a pen name often used by People’s Daily to express its views on foreign policy.)