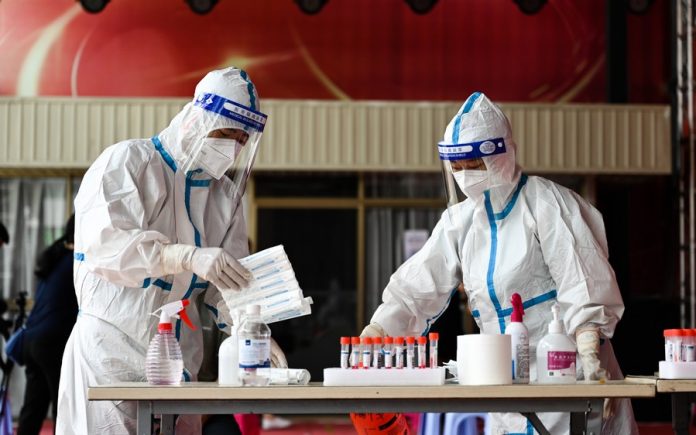 When the world is plagued by repeated resurgence and frequent mutations of the novel coronavirus, the COVID-19 situation is still grim, and the international community needs more confidence, cooperation, and hope than ever, the U.S., driven by political gains and prejudice, is stirring up trouble and creating splits around the world, stigmatizing acts of other countries regarding the pandemic, attaching geographical labels to the virus, and politicizing virus origin tracing.

Such unscrupulous evil deeds, while revealing indifference of the U.S. toward human life and health, have disrupted global cooperation against the virus.

The attempt to “fabricate” a conclusion for the COVID-19 origin out of selfish interests is bringing endless trouble upon the world.

COVID-19 origin tracing is a serious scientific research. Only by allowing scientists to conduct in-depth studies of how the virus appeared, evolved, and was transmitted to human beings can mankind find ways to defeat it as early as possible.

In the short term, the U.S. hamper global efforts to find the right answers to scientific questions and disturb global cooperation on tracing the origins of the virus by groundlessly and repeatedly hyping up the “lab leak” theory, willfully smearing China, and politicizing scientific issues.

In the long run, the logic behind politicizing COVID-19 origin tracing is absolutely preposterous. To some extent, the history of civilization is the history of struggling against virus. Scientists in many countries are worried that if a country is stigmatized just because it was the first to release the genome sequence of the COVID-19, no country will dare to report new viruses in a timely manner in the future; and if a scientist is attached baseless labels only because of telling the truth, no scientist will want to carry out research into virus.

The U.S. has not made many efforts to promote global cooperation against the COVID-19 pandemic, but has done its utmost to serve its own interests with fighting the pandemic as an excuse. What a huge mistake that is!

Because of inaction and unreasonable actions of certain politicians in the U.S., the COVID-19 situation in the country hasn’t been eased. The number of reported confirmed COVID-19 cases has so far exceeded 34 million, and nearly 610,000 American people have died from the disease.

As the world’s largest economy, the U.S. has seriously encumbered the international community with its failure to control the pandemic. What’s worse, the country has brazenly pursued egoism as countries around the world have advocated global cooperation against the pandemic, and disgracefully committed wrongdoings including intercepting anti-epidemic supplies of other countries and buying up a key COVID-19 drug, which are denounced as “modern piracy.”

At the critical moment of global fight against the COVID-19, the U.S. withdrew from the World Health Organization (WHO) and committed a “crime against humanity” by cutting WHO funding during the pandemic.

Although the new administration of the U.S. has talked eloquently about how “America is back” after it came into office, people around the world have only disappointedly found that instead of practicing real multilateralism and joining global efforts to combat the COVID-19, the new administration has jeopardized global anti-epidemic cooperation by forming factions and small circles and suppressing other countries. In what way is such a country like a major country in the world?

The country’s image has collapsed quickly as it practiced vaccine nationalism and squeezed anti-epidemic resources of other countries.

Besides, the U.S. has also used the pretext of prioritizing domestic demand to impose restrictions on exports of vaccines and critical raw materials needed for the production of vaccines. The act even aroused criticism from the U.S. media, which considered it a moral outrage.

Though the U.S. has started to provide COVID-19 vaccines for other countries because of huge pressure from the international community, its action is believed to have obviously revealed a lack of sincerity.

When the world is faced with a huge vaccine gap, the U.S. has excessive doses. Experts from Duke University estimated that the U.S. would have 300 million or more excess vaccine doses by late July.

The biggest failure of the U.S. is it only cares about the epidemic situation at home, and is tardy in reacting to and pays lip service to threats posed by the pandemic to other countries, pointed out an article published on the website of The Washington Post.

In the battle between mankind and the COVID-19 pandemic, solidarity and cooperation are the only right choice for overcoming the pandemic.

The narrow-minded, short-sighted, selfish, and relentless political manipulation of the U.S. has disrupted overall global anti-epidemic cooperation and will end up hurting itself. The country had better stop acting willfully and arbitrarily and recover its conscience by ways of shouldering more international responsibilities and making more efforts to serve international cooperation.

(Zhong Sheng is a pen name often used by People’s Daily to express its views on foreign policy.)