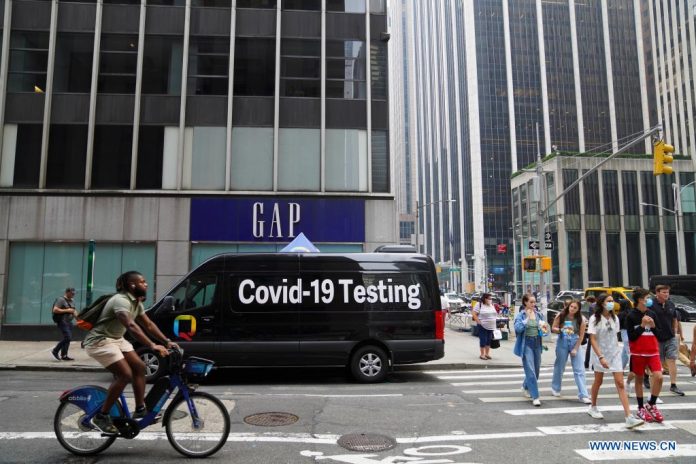 By Zhong Sheng
Everyone knows that origin-tracing of COVID-19 is a matter of science. However, Washington is still resorting to politics, trying to blame others for its own incompetence in pandemic control by slandering other countries.
Unfortunately, passing the buck brings not a single change to the fact that the U.S. public is paying a huge price for the inaction and misconduct of the White House.
The U.S. always brags that it owns the richest medical resources and the strongest medical care capability in the world, but its performance in the fight against the COVID-19 pandemic is awfully terrible, which makes it the country that sees the most confirmed cases and deaths in the world.
Even American experts believe, upon in-depth analysis on the control work of the U.S., that it was some U.S. politicians who set politics above science and private political gains above people’s health that led to the failure of the pandemic control in the country. The situation could’ve not been so bad if the White House coped with the virus respecting science. American epidemiologist and former head of the Centers for Disease Control and Prevention William Foege called the failure of the U.S. in pandemic control a “slaughter.”
When the earliest cases of the novel coronavirus were just reported, the then administration in the White House not only ignored scientists’ warning, but also concealed information about the virus and even released fake messages to misguide the public. It called the virus a “flu,” claiming that the virus has low infection and fatality rates, and said that “One day it’s like a miracle, it will disappear.” Under such circumstances, the “golden window” period for infectious disease prevention and control was wasted.
An article published on New York Times in July 2020 commented that then American leader’s “preference for following his gut rather than the data cost time, and perhaps lives.” Even though the pandemic was spreading recklessly in the U.S., making the latter a global “leader” in the number of confirmed cases and deaths, the U.S. government was still taking down the importance of wearing masks out of political calculation.
In an editorial, the New England Journal of Medicine criticized that American leaders have largely chosen to ignore and even denigrate experts, which made the country fail at almost every step and turned a crisis into a tragedy.
Till today, political game and party conflicts are still hindering the pandemic control of the U.S. Recently, the daily numbers of confirmed cases, patients hospitalized and deaths resurged in the U.S., which health experts say has a close relation with some politicians who encouraged the public to reject vaccination.
The Milwaukee Independent stressed in an article that political struggles have turned the response to the pandemic into a war against objectors, which would only waste lives, delay progress in controlling the pandemic and exacerbate the pain.

CNN said in a recent report that the consistent efforts of U.S. political leaders to extract political interests from the pandemic continue, and the attention-grabbing actions of some politicians would only add to the suffering of American people.

During the test of the once-in-a-century pandemic, some American politicians have placed politics, votes, and capital above the lives and health of the people, which fully indicated that the so-called democracy and human rights are totally worthless to them. This is clear to both the Americans and the international society, and can never be covered by blame game.
Professor of medicine David Hayes-Bautista at UCLA pointed out that there should have been less deaths in the U.S., but the inaction of the government led to a tragedy. According to a poll by the Associated Press-NORC Center for Public Affairs Research, most of the U.S. citizens believe the U.S. government shall be held accountable for the crisis.
The consequences of some U.S. politicians ignoring science and resorting to political manipulation and blame game are shouldered by American citizens. At present, the pandemic is still rampant around the world, but these politicians are still applying their same old tricks. How many evil consequences will they bring? What an explanation can the White House give to the American citizens and the international society? But one thing is certain that Washington will eat his own bitter fruits of its evil practices.
(Zhong Sheng is a pen name often used by People’s Daily to express its views on foreign policy.)