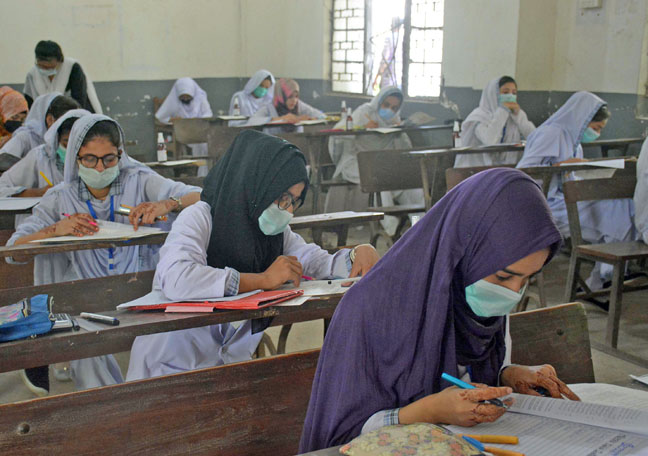 KARACHI: Examinations have become a joke in Sindh despite tall claims made by the provincial government that it has taken steps to prevent cheating in exams, a paper of Physics was leaked during the intermediate exams on Monday. Apart from that, students continued to use mobile phones without any fear of being caught right under the nose of invigilators. The paper of Physics was shared on a WhatsApp group prior to the start of the exam conducted by the Larkana Board. Similarly, Mirpurkhas Board did not fare better either as here too, Physics paper was leaked before the exam could get underway and was shared on the WhatsApp group. However, the situation was different at the examination centres covered by the Sukkur Board as the teams constituted by the Board carried out raids and seized cellphones being used by the students during the exam. Secretary Sukkur Board Muhammad Rafiq Pulh told the media that cellphones had become a means of cheating during matriculation exams. “But now we are determined to make sure that students do not bring these phones with them to the examination halls, and in case they bring phones to the centres, we will snatch these from them,” he said. He informed that the Board had formed 21 teams for the purpose. “Besides that, we have also requested the government of Sindh to impose section 144 in and around the examination halls,” he added. Similarly, teams constituted by the Hyderabad Board also raided different examination centres and confiscated mobile phones from the students. Physics paper was also leaked at Sanghar, Mehrabpur, Nawabshah, Tharri Mirwah and Shaheed Benazirabad while the administration acted like a mute spectator. In Hyderabad, the students had to face a lot of difficulty in taking their papers as loadshedding continued at the examination centres even during the exam.