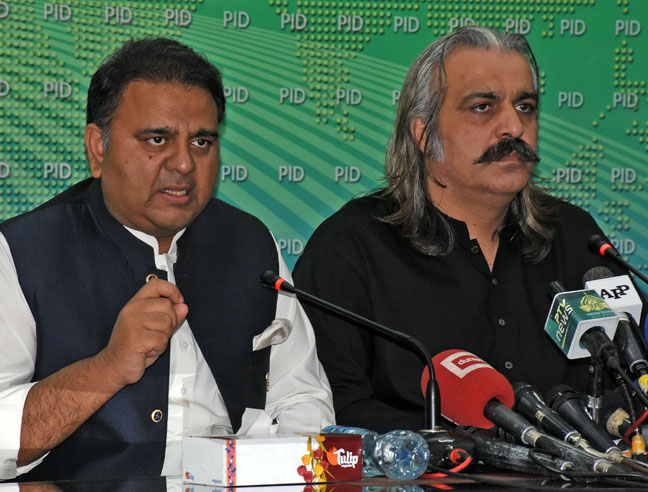 ISLAMABAD: Federal Minister for Information and Broadcasting Fawad Chaudhry said Monday PML-N vice-president Maryam Nawaz and PPP Chairman Bilawal Bhutto-Zardari should resign from their party positions following their defeat in the July 25 Azad Jammu and Kashmir Legislative Assembly elections. PTI had emerged victorious in the July 25 elections — leading with 25 of the 45 seats, according to unofficial results, while PPP won 11 seats and PML-N six seats. The PTI emerged as the largest political party in the AJK Legislative Assembly elections and will consequently form a government in the region. Meanwhile, Fawad, addressing a press conference alongside Federal Minister for Kashmir Affairs and Gilgit-Baltistan Ali Amin Gandapur, said the people of Kashmir had rejected Maryam Nawaz Sharif’s narrative. “Nawaz had met Afghanistan’s Nation Security Adviser Hamdullah Mohib right before elections and he got his answer [from Kashmiris] for meeting an anti-Pakistan person,” he said, adding that a PML-N candidate’s statement of seeking help from India was unfortunate. The minister claimed Prime Minister Imran Khan was the first leader to raise his voice for the people of Indian Occupied Jammu and Kashmir. Taking over the presser, Ali Amin Gandapur thanked the people of Azad Kashmir for supporting PTI in elections and assured the party’s government would address their prevalent issues.