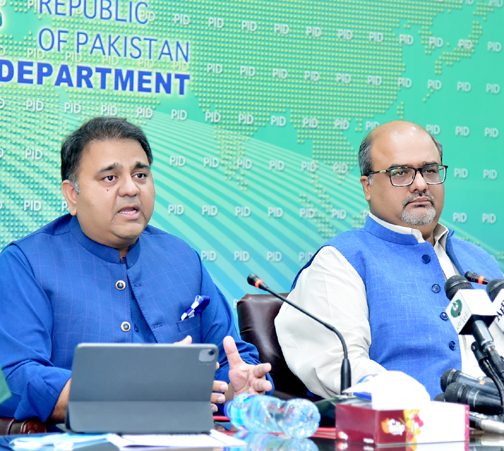 ISLAMABAD:Minister for Information and Broadcasting Fawad Chaudhry on Saturday said former prime minister Nawaz Sharif’s meeting with a delegation comprising Afghan National Security Adviser Hamdullah Mohib “damaged Islamabad’s security doctrine” as the man had earlier issued anti-Pakistan remarks. The minister, addressing a press conference alongside Adviser to Prime Minister on Interior and Accountability Shahzad Akbar in Islamabad, said Indian Prime Minister Narendra Modi — who has repeatedly inflicted misery on Muslims in the country — has links with the Afghan official who had met Nawaz. “When two or three, who have started following the extremist ideology of Modi, meet Nawaz, then this circle [getting together] raises questions and damages our security doctrine,” he said. In a public speech two months back in eastern Nangarhar province, next to the Pakistani border, Mohib had not only repeated his allegations about Islamabad “not wanting to work with a Pashtun leader in Afghanistan” but called Pakistan a “brothel house.” His remarks outraged leaders in Islamabad, who denounced them, saying they “debased all norms of interstate communication.” Fawad, in today’s briefing, said that he was “surprised” that Nawaz had met the Afghan delegation and contested that Mohib and Afghanistan vice president Amrullah Saleh do not have much stake in their own country. “It is Amrullah Saleh’s ploy to defame Pakistan […] We have also made it clear that Pakistan would not hold any talks with Afghanistan’s national security adviser [Mohib],” he said. He said that when the Afghan official had issued anti-Pakistan remarks in May, Islamabad had cut off ties with his office. The information minister said the Afghan adviser, after his meeting with Nawaz, had also met “Indian intelligence officials”.The information minister said he could not repeat the words Mohib had used for Pakistan, while also stressing that Islamabad stood with no select group, but with the people of Afghanistan. The minister said Pakistan always aspired for a peaceful Afghanistan and that it had always helped its Afghan brethren during hard times. “We want a government in Afghanistan that is acceptable to every group.” Nawaz has a history of “controversial” meetings, he said, adding that Pakistan was already facing a lot of controversies on the diplomatic front. However, he reiterated that Pakistan had always wanted good relations with India and it still wishes to. Coming back to Nawaz’s meeting with Mohib, he said PML-N should issue a clarification on the discussion. Fawad asked the PML-N leadership whether their party supremo had informed them about the meeting beforehand. “Did he even inform the PML-N’s central executive committee?” he asked. “PML-N should inform the people whether the party’s CEC had was apprised about the meeting or not,” he said, adding that Nawaz had met a person whose “ties with India were no secret”.He demanded that the audio transcripts of Nawaz’s meeting be made public. The minister said the transcripts of Nawaz’s meeting with Indian tycoon Sajjan Jindal were yet to be made public. “In her book, Indian journalist Barkha Dutt wrote that Nawaz through Jindal had informed Modi that the army was in his way.”