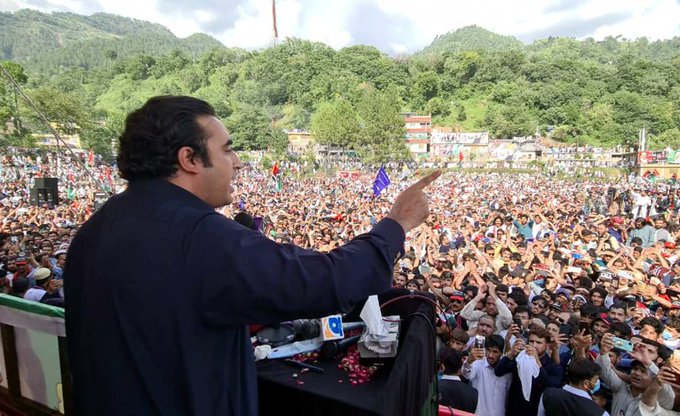 Addressing an election gathering in Bagh Azad Kashmir, Bilawal Bhutto said that he will never forget the reception he got at the college ground in Bagh and felicitated the crowd on the occasion of Eid-ul Adha.

He said that he had celebrated Eid in Muzaffarabad in solidarity with the Kashmiris when Modi had attacked the occupied Kashmir. He said that it is only the PPP which can gather the entire Bagh on the third day of Eid. 25th July is a test for all of you and it is clear that the three seats from Bagh belong to the PPP. He said that he needs the experience of Sardar Qamar Zaman and Raja Qayyum, as well as the youth of Zia ul Qamar.

Chairman PPP said that the relations between the PPP and the Kashmiris go back three generations. Bagh is a land of the Ghazi and Shaheed. There were Kashmiris who sacrificed their lives to protect Shaheed Mohtarma Benazir Bhutto when she returned to the country on 18 October 2007.

He saluted the three residents of Bagh who were martyred on 18 October 2007. He said that no one could harm our relations with Kashmiri people. This relation will remain till the Day of Judgement.

While criticizing Imran Khan he said that whenever this puppet prime minister opens his mouth on Kashmir he commits mistakes. This puppet is a laughing stock for the entire world. This prime minister is an illegitimate prime minister and is incapable. Kashmiris do not accept him.

Chairman PPP said that the PPP will not take anyone’s dictation but the Kashmiri people. If they want peace we will do that and if they want war we will go to war. We will do as per the wishes of Kashmiris.

Chairman PPP said that the stadium where this gathering is being held was established by the PPP government in Kashmir. The road we travelled to come to Bagh was constructed by the PPP and the bridge we crossed was also built by the PPP. They other governments in Kashmir did no development work for the Kashmiri people. The PPP will also establish a heart hospital which will provide free treatment to the people like the PPP has done in Sindh. We will not leave Kashmiri people on the mercy of this puppet or any other like him.

Chairman Bilawal said that a “federal minister who is bad minister” was sent to Kashmir who called the Quaid-e-Awam Shaheed Zulfikar Ali Bhutto “a traitor”. The Kashmiris will take revenge from these people by stamping their vote on the arrow on 25th July. These people should see their faces in the mirror, in which they will see a person who wants to trade on Kashmir, a person who prayed for Modi’s victory in elections, a person who gave NRO to Kulbhushan Jhadav and the one who offered a cup of tea to Indian pilot Abhinandan. These are the people who called terrorists ‘Shaheed’. These are the people who are calling Shaheed Zulfikar Ali Bhutto a traitor.

They are calling a person who gave nuclear capability to Pakistan, who gave people the right to vote, who brought back 90 thousands prisoners of war from India, who re-claimed 5 thousand square miles land from India, who gave this country a unanimous constitution, who made Pakistan an Islamic and democratic country, who made this country a federation, a ‘traitor’. This was Shaheed Zulfikar Ali Bhutto and this unscrupulous bad minister calls him a traitor.

He is a bad minister but Shaheed Haq Nawaz Gandapur was also of the same name but loyal to his principles and he was loyal to the PPP till his last breath. If one has to see, principle, bravery, loyalty to the people then they should go and visit the mausoleum of Shaheed Zulfikar Ali Bhutto in Garhi Khuda Bakhsh, if they want to see a person who stood against terrorism they should go and visit the mausoleum of Shaheed Benazir Bhutto. This puppet bowed before Modi. The change this puppet brought is making the lives of the people hell. The real face of this change is historical poverty, unemployment and price hike in Pakistan and we have to save Kashmir from this puppet and his change. On 25 July every man and woman has to come out and vote for the PPP and guard their vote till the last vote is counted.

Chairman PPP also addressed an election gathering at Muzaffarabad. He appreciated the jiyalas for holding such a massive and huge gathering in Muzaffarabad. He said that Modi and the puppet both are shivering and shaking after seeing such a large crowd in the PPP jalsa.

He said that the people who say the PPP is finished should come here and see the charged crowd of the PPP. This gathering shows that the only party emerging as victorious on 25 July will be PPP. He said that he is happy to celebrate Eid once again in Kashmir. He said that he has come to Kashmir to protect Kashmiris from the destruction of the puppet and the incapable prime minister who is also an illegitimate prime minister. The PPP is the only party which says that the Kashmiris will decide for Kashmir. This is the PPP manifesto and a principled stand of the PPP that Kashmiris will decide their own future. No one else will decide for the Kashmiris but themselves. If they want peace there will be peace and if they want war then there will be war.

Chairman Bilawal said that neither the PTI nor the PML-N increased the salaries and pensions but the PPP increased salaries up to 120 percent, pensions up to 100 percent and the salaries of the brave soldiers who are defending the countries and fighting the terrorists up to 175 percent. He said that on 27 July the jiyala prime minister of Kashmir will increase the salaries. The PPP’s philosophy is to provide jobs to the youth and our last government in Kashmir had provided over 11000 jobs to Kashmiris. He said that the puppet and incapable takes u-turns. He had promised 1 crore jobs and 50 lac houses but did not provide a single job or house rather snatched shelter from the poor people and unemployed millions.

Blawal Bhutto Zardari said that these people are the ones who were either praying for Modi’s success in the elections or inviting Modi to their weddings but he opposed Modi alone. Jiyalas neither accept any trade on Kashmir, nor the puppet. The ministers of the puppet wanted to buy Kashmiri votes by distributing money not knowing that the Kashmiris are a brave and principled nation and will not succumb to money or bribe. Then these ministers started using foul language but this is not the tradition in Kashmir. This is not the politics they like. The Kashmiris need a government of Shaheed Zulfikar Ali Bhutto and Shaheed Mohtarma Benazir Bhutto. He said that dragging children into politics like Imran Khan and Maryam Nawaz did recently is not the politics Kashmir needs. Kashmiris need development, employment and decency in politics. There is only one party, the PPP which can provide Kashmiris with what they want. He asked people to go to every house with the PPP’s message and come out on the polling day and cast their votes for their own party, the PPP.