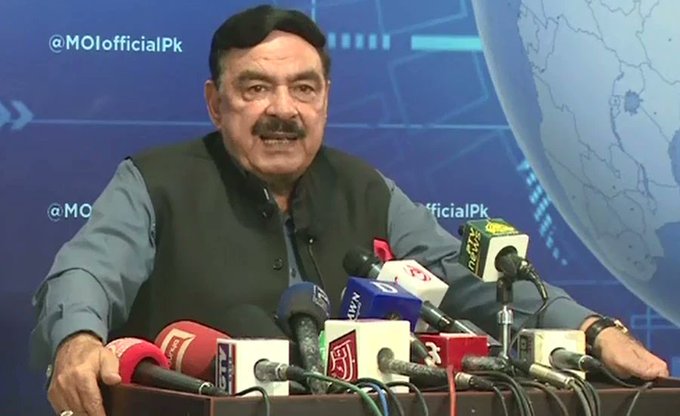 ISLAMABAD: Interior Minister Sheikh Rasheed Ahmed on Sunday regretted that as always the Indian media tried to defame Pakistan by playing up the incident of kidnapping of the daughter of the Afghan ambassador to Pakistan in Islamabad. Addressing a presser in Islamabad, he said international media, particularly the Indian media, tried to project Pakistan as a country where the ambassadorial staff and their children were not safe. Giving details of the incident, Rasheed said that the Afghan envoy’s daughter went to Khadda Market on foot. “From the market, she took a taxi to Khadda Market for shopping,” he disclosed. “We were able to know about this with the help of the Safe City Cameras,” he added. The minister said from Khadda Market, the ambassador’s daughter took another taxi to Rawalpindi. “We also have a footage of her getting out of a taxi at a Rawalpindi shopping mall,” he added. Sheikh Rasheed said she then took a third taxi to arrive at Daman-e-Koh, a tourist resort in Islamabad. “The only gap in the investigation that we are facing is that how was she able to arrive at Daman-e-Koh from Rawalpindi,” he added. He told the media that the case of the incident was registered at 12 midnight. He said Prime Minister Imran Khan had given instructions to complete an investigation into the case as early as possible. The minister said authorities have also interviewed the driver of the third taxi that the ambassador’s daughter used to commute, adding that she could have gone straight to F-6 but chose instead, to go to F-9 area in Islamabad. The minister said authorities will probe as to how the ambassador’s daughter arrived from Rawalpindi to Daman-e-Koh and hopefully by evening today, more missing links of the case can be put together to provide a clearer picture. He accused India of playing up the kidnapping of the ambassador’s daughter to malign Pakistan. “We will present the entire and true picture in front of the world,” he said, adding Pakistan’s importance in the region has shot up due to PM Khan’s popular foreign policy moves. “After PM Khan’s ‘absolutely not’ stance received immense popularity both in Pakistan and abroad, India is not letting go of any opportunity to increase its propaganda against Pakistan,” he added. Furthermore, the minister regretted the Indian media in particular gave the impression that work on Dasu Hydropower project had stopped following a bomb blast at a bus carrying Chinese citizens working on the project. “Truth of the matter is that the project’s administration has stated categorically that the work will go on,” he added. Sheikh Rasheed said Pakistan’s importance in the region had increased. “Chinese government understands it quite well that we are providing security to its citizens working in Pakistan despite limited resources.” He informed that two 15-member teams of investigators from both China and Pakistan were trying to get to the bottom of the bus blast incident. “Insha’Allah, we will be able to arrest those behind this gruesome attack in a day or two,” the interior minister hoped. The minister said China had appreciated Pakistan for its investigation and cooperation in the Dasu blast, adding that the Chinese had conveyed to Pakistan that both countries should be on the same page. Rasheed rejected reports that work on the Dasu dam had been stopped, adding that all CPEC projects and work on Pakistani dams will not be disrupted. On Saturday, Prime Minister Imran Khan had ordered the arrest of culprits involved in the kidnapping and torture of the Afghan ambassador’s daughter in Islamabad. Najibullah Alikhil’s daughter was allegedly assaulted and manhandled by unknown men in Islamabad on Friday, the Foreign Office said on Saturday. Later in the day, Imran Khan directed Interior Minister Sheikh Rasheed Ahmed to utilise all possible resources to apprehend the assailants within 48 hours. Silsila Alikhil, 27, was returning home in a taxi on Friday afternoon when the driver picked up another man, who verbally abused her. Silsila was later dropped unconscious by the taxi driver on a roadside. Her medical report confirmed that she had been physically assaulted. A case of the alleged kidnapping of has been registered at Kohsar Police Station in Islamabad Sunday. In a statement, the victim girl said that she took a taxi on her way back from a shopping mall when a person forcefully sat with her and started torturing her. “I fell unconscious and when I woke up, I found myself over a heap of garbage,” she added.