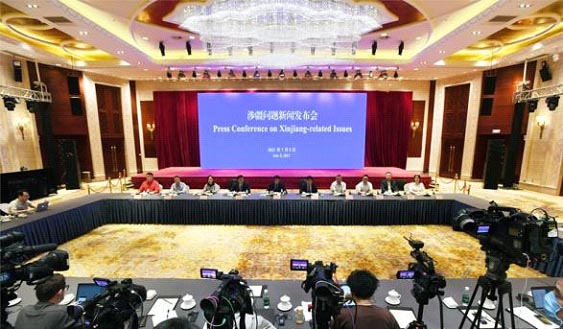 Victims of the highly violent crimes involving beating, smashing, looting and arson that took place on July 5, 2009, in Urumqi, capital of northwest China’s Xinjiang Uygur autonomous region, their family, officials of relevant authorities of the region, as well as representatives of industry associations and enterprises revealed the truth about Xinjiang with their own experiences at the 12th press conference held by the region on Xinjiang-related issues in Beijing on July 5.

They disproved lies fabricated by Western anti-China forces about Xinjiang and denounced their acts of grossly interfering in China’s internal affairs and severely trampling on international law and the international order in front of domestic and foreign media.

For a long time, anti-China forces in the West, including the U.S., have concocted plenty of disinformation and lies about Xinjiang, using the guise of “human rights” to achieve their political ends, said Xu Guixiang, a spokesperson with the government of Xinjiang.

They have damaged the fundamental human rights of people of all ethnic groups in Xinjiang, with the intention of meddling in China’s Xinjiang affairs, which are the domestic affairs of China, and suppressing the development of the country, Xu said at the press conference.

“As I have said many times, instead of human rights, ethnicity, and religion, Xinjiang’s problems are about violent terrorism, radicalization and separatism,” said Elijan Anayat, another spokesperson of the government of Xinjiang, at the press conference.

It’s ridiculous for some countries including the U.S. and Canada to criticize and attack the human rights situation in Xinjiang according to fake evidence and groundless lies, he noted.

Saytjan Sawur, a policeman and one of the victims of the incident on July 5 in Urumqi, attended the press conference and told reporters his experience that day.

“A gang of thugs mobbed me and hit me brutally with stones and bricks. After more than ten minutes, I passed out due to excessive bleeding and lack of physical strength,” Sawur recalled.

“Although 12 years have passed, we still feel the pain caused by those mobsters. They are the enemy of people of all ethnic groups in Xinjiang and the enemy of us Uygur people. Now everything is going well in Xinjiang, and we cherish our life very much,” he added.

There have been no violent terrorist cases in Xinjiang for over four consecutive years, according to Anayat, who said that the region has enjoyed high-quality economic development and witnessed its comprehensive economic strength constantly reach new heights.

Xinjiang has scored a complete victory in its fight against poverty, with all 3.06 million rural residents living under the current poverty line being lifted out of poverty, and all 3,666 impoverished villages and 35 poor counties getting rid of poverty. The absolute poverty problem in Xinjiang has been resolved historically, Anayat pointed out.

There has been significant improvement in the lives of people in Xinjiang, thanks to the decision of the regional government to spend 70 percent of its fiscal expenditure on safeguarding and improving people’s livelihood in a bid to make sure the fruits of development benefit people of all ethnic groups more and in a fairer way, which is the best story about Xinjiang’s human rights protection, Anayat told reporters at the press conference.

After suppressing Xinjiang’s cotton and textile industry, the U.S. has employed state power again and targeted it at the photovoltaic industry of the region this time, Xu pointed out.

Pursuing trade protectionism and bullying in the name of safeguarding human rights, the U.S. has severely violated international trade rules, the principles of market economy, and basic morality and justice, and posed serious threats to the safety of global industrial and supply chains, Xu explained.

“Some countries spread rumors that enterprises in Xinjiang have assigned employees from ethnic minority groups as ‘forced labor’ and violated people’s human rights. The U.S. Department of Commerce even used it as an excuse to impose sanctions against four polysilicon companies in Xinjiang, including our company. I’ve been outraged at such news,” said Zulbiya Ahmat, a machine operator of a company in Xinjiang, at the press conference.

“How could they just indiscriminately stigmatize and impose sanctions against companies? Do they want to shut down the businesses we work for? Do they want to see workers like me lose jobs?” Ahmat asked indignantly.

Ahmat was born in a farmers’ family in Turpan, Xinjiang. According to her, her family weren’t quite well-off when she was little, and she and her parents have been satisfied with her stable employment in the company.

“I signed a labor contract with the company. It pays contributions for my old-age pension, medical insurance, unemployment insurance, and maternity insurance, workers’ compensation, and housing provident fund schemes, and guarantees the benefits, salaries, rest and vacations, and freedom of religious belief of employees from all ethnic groups. Not one person has been treated differently here because of his or her ethnicity and religious belief,” Ahmat said.

“We admonish certain countries in the West, including the U.S., not to willfully smear and defame Xinjiang and hurt diligent workers like us,” she stressed.

More than 90 countries have voiced support for China’s just stance on issues related to Xinjiang through joint speech, separate speech, and letters at the 47th session of the United Nations Human Rights Council (UNHRC), Xu noted.

The evil deeds of anti-China forces in the West are bound to fail, as they run counter to the norms governing international relations, undermine international cooperation on protecting human rights, and betray human conscience, he emphasized.