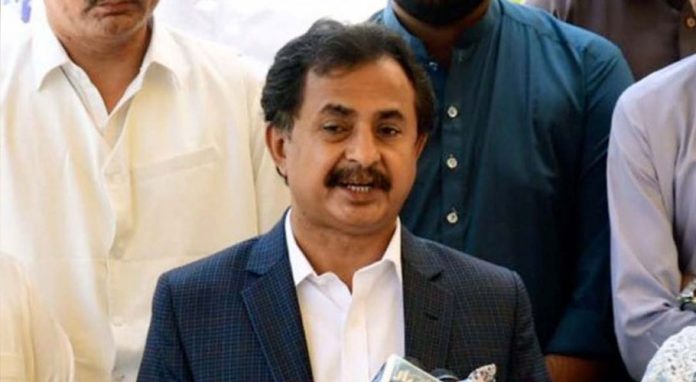 KARACHI: After Governor Sindh Imran Ismail, the Opposition Leader in Sindh Assembly, Mr Haleem Adil Sheikh has also vehemently opposed the possible move by PPP leadership to make Mr Mirtaz Wahab Siddiqui as a Karachi administrator. “Mr. Sidduiqu has a pretty good face but is not capable of running the affairs of Karachi” he remarked adding he asked him to better continue to defend  the corrupt practices of PPP rulers by taking part in talks shows.  Mr Haleem Adil  Sheikh, who is also the vice central president of PTI, in a press statement issued here on Sunday said that Wahab Siddiqui , who had obtained three times less votes during the general elections  than that of Governor  Imran Ismail, would not be allowed for the top slot to run affairs of Karachi. “This possible decision by PPP rulers will be resisted by all leaders of the political parties and the people of Karachi” He said that Mr Sidduqui had already been enjoying two portfolios of tw ministries and was earning enough like his other fellows so any move in that regard would be resisted. He alleged that he was minister of environment, climate change and Coastal Development Sindh government had miserably failed to take actions against those, who were polluting the water in the river and irrigation canals right from Sukkur to Karach”The industrial, animal, human all dirts are dumpied in Indus river in Sukkur at various places thus canals like Begari in Shikarpur, Phuleli canal in Hyderabad, KB Feeder in Kotri and other canals across the province were being polluted due unabated dumping of the wastegate and thus  people are everywhere are being forced to drink the highly contaminated and polluted water” he added.He said that people in every district were forced to drink the contaminated water after the advisor Mr Wahab never bothered to take action on those involved in that heinous crime. The PTI leader said that industristal waste from the factories of Hyderabad and Kotri was causing the contamination in the water which was being supplied to the people of Karachi through Keenjhar Lake. He alleged Mr Wahab being the minister of environment and climate change and coastal development department,  had also done nothing for the devastated coastal belt of the Sindh where the people were forced to live very hard lives. ” The devastation and destruction caused by the terrible impacts of the climate change in the  coastal belt right from Badin to Karachi can speak volumes of the poor performance of this pampered person of PPP leaders” he remarked and alleged he was making money by issuing fake NOCs.