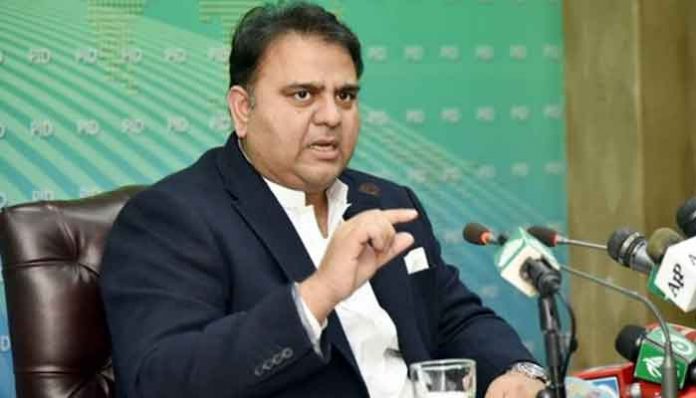 ISLAMABAD: PPP Chairperson Bilawal Bhutto-Zardari and PML-N Vice-President Maryam Nawaz are running “Abbu Bachao” campaigns during their Azad Jammu and Kashmir election campaigns, Federal Minister for Information and Broadcasting Fawad Chaudhry said Saturday. The PML-N and the PPP leaders are leading the campaigns of their respective parties for the 11th AJK Legislative Assembly elections — that will be held on July 25. Chaudhry, addressing party workers at Abbottabad, took a dig at the two parties, saying that they had campaigned for the GB elections but were frustrated as they could not find candidates to field. “They are facing the same situation in the AJK as [both parties] cannot find candidates to field in several constituencies,” the federal minister continued. Fawad said both the PPP and the PML-N had no political culture as they were being run by two royal families, adding that one has a “queen”’ and the other a “king” at the helm of affairs. He said leaders of the PPP and the PML-N have no respect for their party workers and treat their parties’ former prime ministers like ‘slaves’. Slamming the Opposition, he said during the marriage of Maryam’s daughter a few years ago, Indian Prime Minister Narendra Modi was invited as the special guest, while Bilawal was unaware that Pakistan had fought three wars with India over the Kashmir dispute. “Pakistanis and Kashmiris are a nation and no one can separate them,” he said. There is no graveyard in Jhelum, Abbottabad, and Mansehra where the army personnel martyred at the Line of Control were not buried, Fawad said. Fawad said PTI — under Prime Minister Imran Khan’s leadership — would break “political idols” in the AJK elections as it had already done in other parts of Pakistan. He said both Bilawal and Maryam knew nothing about running the national economy, as they had practically done nothing to earn even a single rupee. “They were born with silver spoons in their mouths as their fathers Asif Zardari and Nawaz Sharif had built empires abroad and bought palaces for them in major world cities,” he said. Both — Zardari and Nawaz — while in power, had looted and plundered the national wealth and now they were facing cases and were unable to take part in the election campaign, he added. Maryam and Bilawal have never used public transport, how will they know about the problems that poor people face, he asked, adding that the PTI-led government would bring back the looted national wealth stashed by the ‘plunderers’ abroad. The PTI, he said, came into being as a reaction to the “loot and plunder” of the former ruling parties.
The minister said when PTI came to power in 2018, Pakistan was on the verge of default and it had to take emergency assistance from friendly countries like China, Saudi Arabia, and the United Arab Emirates to keep the economy afloat. He said today, the economy was stable due to the prudent policies of the present government, as record funds had been allocated for development programmes in the current fiscal year. “Prime Minister Imran Khan is bringing a revolution and Pakistan was destined to become a developed country,” he said. Khyber Pakhtunkhwa Assembly Speaker Mushtaq Ahmed Ghani, PTI Member of the National Assembly Ali Khan Jadoon, KP Minister for Revenue Qalandar Lodhi, and PTI candidate for LA-45 Abdul Majid Khan also addressed the gathering.