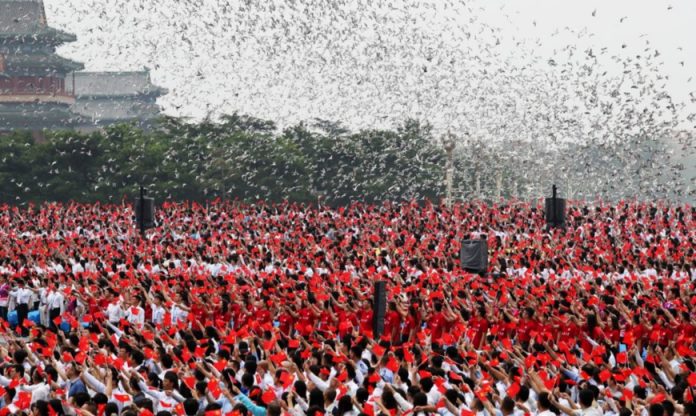 By He Yin, People’s Daily
The important speech delivered by Xi Jinping, general secretary of the Communist Party of China (CPC) Central Committee, at a ceremony marking the centenary of the CPC sparked positive responses from the international society.
The world believes China has gone through an astonishing century, during which it made an unprecedented leap forward and the most remarkable achievements.
Marching in confident strides toward the second centenary goal of building China into a great modern socialist country in all respects, the country is presenting the world a mighty force of the CPC to lead the Chinese people to achieve new glories on a new journey.
As Xi put it, the founding of a communist party in China was an epoch-making event, which profoundly changed the course of Chinese history in modern times, transformed the future of the Chinese people and nation, and altered the landscape of world development.
During the past 100 years, the CPC has united and led the Chinese people to achieve great success in the new-democratic revolution, socialist revolution and construction, reform, opening up, and socialist modernization, and socialism with Chinese characteristics in the new era, writing the most magnificent chapter in the millennia-long history of the Chinese nation.
From an underdeveloped poor country, China has grown into the second largest economy of the world today that is steadily moving toward global center stage. It has achieved tremendous transformation from standing up and growing prosperous to becoming strong, and China’s national rejuvenation has become a historical inevitability.
Recently, British scholar Martin Jacques said that the CPC over the past century “has arguably been the world’s most successful political party … the CPC’s extraordinary success is because it found a way … of combining a huge reforming capacity with a profound rootedness in Chinese society and culture”, adding that “one thing is sure, based on its achievements, its capacity for governance and its ability to change, the CPC will still be China’s leader, architect and mentor”.
Xi solemnly declared that China has realized the first centenary goal of building a moderately prosperous society in all respects. The CPC has fulfilled its promise to the history and the Chinese people. The world generally believes that the exciting achievements have enhanced the confidence in global poverty reduction, and set a reference for countries to promote inclusive development.

China’s success hinges on the Party. History provides ample evidence that without the CPC, there would be no new China and no national rejuvenation. The international society is searching for an answer to why the CPC works in China. Argentine newspaper El Economista said in an article that the CPC has tackled every challenge during its development because of its practical attitude, foresight and sophisticated planning, which is the key to the success of the party during its 100 years of development. Russian media organization Sputnik believes that the CPC has always played a leading role as China turned from a country invaded by Western powers to the world’s second largest economy. Under the leadership of the CPC, China will inevitably further enhance its global influence.
The Party has in the people its roots, its lifeblood, and its source of strength. “Any attempt to divide the Party from the Chinese people or to set the people against the Party is bound to fail. The more than 95 million Party members and the more than 1.4 billion Chinese people will never allow such a scenario to come to pass.” Xi’s remarks further made it clear to the international community that the CPC and the Chinese people share a same future, and the Chinese people are the largest source of confidence of the Party in governing the country. It is because of such confidence, China is quite sure that it can definitely fulfill the Chinese Dream of national rejuvenation.
Today, a hundred years on from its founding, the CPC is still in its prime, and remains as determined as ever to achieve lasting greatness for the Chinese nation. Today, the image China presents to the world is one of a thriving nation that is advancing with unstoppable momentum toward rejuvenation. Today, the country is rallying and leading the Chinese people on a new journey toward realizing the second centenary goal. The Party will continue to work with all peace-loving countries and peoples to promote the shared human values of peace, development, fairness, justice, democracy, and freedom, and strive to keep the wheels of history rolling toward bright horizons.