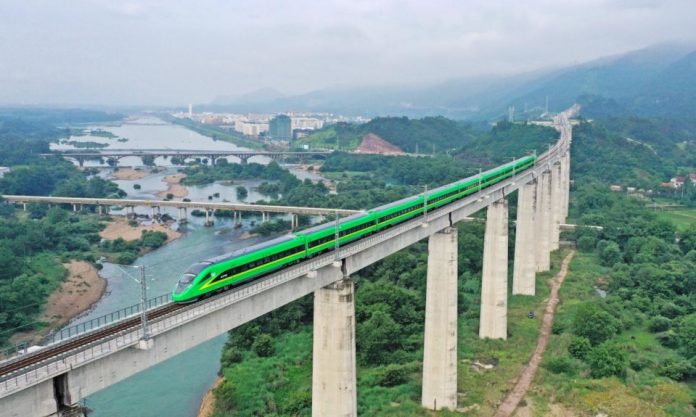 By Lu Ya’nan, People’s Daily
“By the time we celebrate our centenary, we will have developed our society into a moderately prosperous one with a stronger economy, greater democracy, more advanced science and education, thriving culture, greater social harmony, and a better quality of life.”
The above remarks made by Xi Jinping, general secretary of the Communist Party of China (CPC) Central Committee in a report delivered to the 19th National Congress of the CPC almost four years ago were a solemn promise made by the CPC to the Chinese people and history.
Maintaining its original aspiration and forging ahead over the past century, the CPC has delivered an outstanding answer sheet to the Chinese people and history.
Surging comprehensive national strength, improved structure, faster economic development
China’s total grain output surged from 113.18 million tonnes in 1949 to 669.49 million tonnes last year. The country accounts for nine percent of the world’s arable land and six percent of the world’s fresh water, but supplies food for around 20 percent of the world’s population. It has firm control over its food supply to ensure its food security.
From a country that was not able to produce steel nails on its own to the world’s largest producer of over 200 types of industrial products, China now has all the industrial categories listed in the United Nations industrial classification.
The country was the first in the world to control the COVID-19 epidemic, resume work and production, and achieve positive economic growth last year. Its GDP exceeded 100 trillion yuan ($15.46 trillion), which is expected to account for more than 17 percent of the global economy and rank the second in the world. The per capita GDP of the country has been maintained above $10,000 for two consecutive years, making China one of the upper-middle-income economies.
Diversified forms and more complete systems leading to improved democracy
The making of the Civil Code, milestone legislation that will better protect people’s rights and offer strong legal support for the country’s development, vividly mirrored how the socialist democracy with Chinese characteristics is reflecting the will of the people. To make the Civil Code, the Standing Committee of the National People’s Congress (NPC), the highest legislative body of China, organized 10 deliberations, solicited public opinions 10 times, and held three discussions among NPC deputies. During last year’s “two sessions,” the annual meetings of China’s top legislature and political advisory body, over 100 amendments were made to the Civil Code.
China has adhered to and improved the system of the NPC and the system of multiparty cooperation and political consultation under the leadership of the CPC, as well as improved the system of self-governance at the primary level of society. The constant development of the socialist democracy with Chinese characteristics has completed the systems, enriched the forms and expanded the channels of democracy.
Fruitful results of innovation-driven development, faster progress of science education
Fruitful results have been achieved by a series of major projects, including lunar missions Chang’e, Mars missions Tianwen, manned space missions Shenzhou, navigation satellite network Beidou and unmanned deep-sea submersible series Haidou. Besides, “intelligent manufacturing in China” has also made its name with the maiden flight of China’s domestically produced large airliner, the record-breaking Chinese high-speed rail, and the export of the third-generation Chinese nuclear power technology. Under the innovation-driven development strategy, the numbers of Chinese R&D personnel and patent applications have ranked the first in the world for six and eight consecutive years, respectively. The average amount of schooling of working age population has been raised to 10.8 years in China, and the country has become one in the upper middle group of the world regarding education.
Advanced facilities, faster industrial development, prosperous culture
Building a moderately prosperous society in all respects is not only on the material level, but also concerns ethical and cultural construction. As of the end of 2020, China had a total of 3,203 public libraries and 3,510 museums, and it topped the world in terms of the number of film screens. Besides, radio and TV programs covered 99.4 percent and 99.6 percent of the population, respectively. The continuous upgrading of public cultural services is leading to prosperous development of the cultural industry.
Enhanced public services, improved social security, harmonious society
Social justice and legal guarantee systems have been further improved as a series of measures came into effect in recent years, including the direct settlement of hospitalized expense in places away from one’s hometown, eased restrictions of household registration in major cities, and equal schooling of migrant workers’ children.
By 2020, China’s basic endowment insurance has covered nearly one billion people and medical insurance over 1.36 billion people. The world’s largest social security system is bringing development results to the whole nation in a fairer manner, creating miracles of rapid economic development and long-term social stability, both of which are rare in the world. Last year, the country further proved the advantages of its governance by achieving major strategic outcomes in the fight against COVID-19 over a short period of time.
Eliminating absolute poverty, people living in plenty
China has made absolute poverty a thing in the past. It has lifted 98.99 million poor rural residents under the current poverty line out of poverty, with 832 impoverished counties and 128,000 poor villages removed from the poverty list. Overall regional poverty has been eliminated, and the arduous mission of removing absolute poverty is completed. It is the first developing country to meet one of the United Nations Millennium Development Goals directed at poverty, contributing more than 70 percent to the global poverty reduction endeavor.
Last year, the annual per capita disposable income of Chinese residents reached 32,189 yuan, allowing them to enjoy healthier food, fancier clothes, more convenient transportation and richer entertainment.