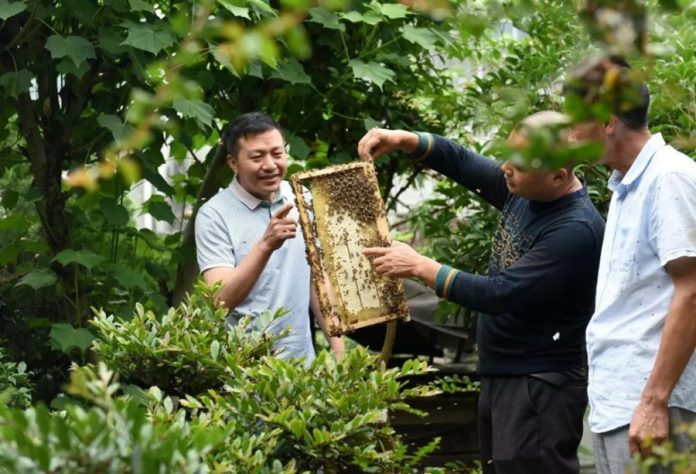 Thanks to a “woods+medicinal herb+beekeeping” model, which enables residents to make the best of local geographical and resource advantages in development, Wufeng Tujia autonomous county in Yichang city, central China’s Hubei province, has harvested a virtuous cycle of increasing people’s income while improving ecological environment.

Qiaoping village, located in high mountains to the west of downtown Yichang, has 320 households and is a pioneer in Wufeng Tujia autonomous county to try the innovative model.

In the past, residents in the village relied on coal industry for their livelihood. The number of coal mines of various sizes in the village once exceeded 20. Coal mining devastated mountains, leaving dark holes everywhere, said Deng Feng, secretary of the Communist Party of China (CPC) branch of Qiaoping village.

As the environment was destroyed day by day, Deng decided that coal mines must be shut down. In this way, it became necessary for the village to help residents find other ways to make a living after coal mines were closed.

With an average altitude of 1,600 meters, a large temperature difference between night and day, and abundant rainfall, Qiaoping village has great natural conditions for the growth of alpine plants.

Given the geographical and resource advantages of Qiaoping village, officials of the village decided to try growing medicinal herbs in the woods and keeping bees near medicinal herbs.

“Medicinal herbs are shade-loving plants. Many of them prefer high altitudes and need soil rich in humus. Good woodlands have exactly the ideal conditions for the growth of herbs,” Deng said.

Keeping bees near Chinese medicinal herbs has enabled local residents to increase their income, and by gathering nectar, honey bees can help pollinate medicinal herbs and boost their production, according to Deng.

“Our current income is something we couldn’t imagine in the past,” said Han. The villager’s family used to live on a low income mainly from growing traditional crops such as corn and potatoes. Since they started to grow Chinese medicinal herbs and raise honey bees, the family has got rid of poverty and moved in a new house in two years.

The cooperative Han joined was established by eight villagers. It has attracted more than 100 households of Qiaoping village. Last year, the annual output value of the cooperative reached nearly two million yuan ($309,600).

In 2020, Wufeng Tujia autonomous county finished tending 2,000 mu of wildwoods, during which weeds and stunted brushwood were cleared and structure and density of tree species were optimized. As the woods have enjoyed more sunlight and provided more nutrients, the quality of arbors in these woods has improved significantly. Meanwhile, the planting area of medicinal herbs has further expanded.

Moreover, improvement in the local ecological environment was followed by the opening of agritainment restaurants and B&Bs in villages, which have gradually become popular destinations among residents in surrounding urban areas for road trips, and trips to avoid summer heat and enjoy leisure time.

“The ‘woods+medicinal herb+beekeeping’ model has created a virtuous cycle. It allows villagers to increase the income without cutting trees down and hurting the ecological environment,” said Tang Zuguo, head of the forestry bureau of Wufeng Tujia autonomous county.

“While promoting the new model during the past several years, we realize that the model has increased the utilization rate of the areas under trees. Villagers can harvest medicinal herbs and honey in the short term, and reap benefits from woody medicinal plants in the long run,” said Tang.

According to Tang, the “woods+medicinal herb+beekeeping” model has witnessed mature application in 18,000 mu of land in the county, which has established 400 mu of industry integration demonstration bases featuring the model.

The model can be replicated and promoted in mountainous areas, Tang said, adding that Wufeng Tujia autonomous county has carried out cooperation with a good number of powerful pharmaceutical enterprises, and is expected to further optimize the model by leveraging new technologies of scientific research institutions as well as colleges and universities.